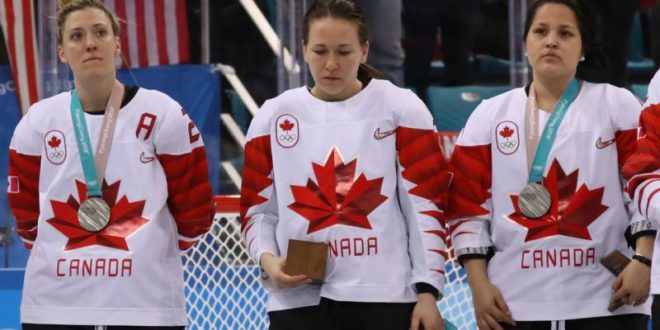 The USA women’s hockey team won its first gold medal since 1998 after a thrilling shootout victory against Canada late Wednesday night. The win snapped Canada’s run of four-straight Olympic gold medals, and the country’s Jocelyne Larocque was not too happy about it.

After the loss, the Canada participants were awarded with silver medals placed around their neck. But Larocque immediately took hers off, and continued to not wear it for the rest of the ceremony.

She told reporters after the game why she didn’t want to wear the second-place medal.

“Just hard. We were going for gold,” she said, via The Globe and Mail. When asked if the silver was any consolation she responded, “I mean, yeah. Once we reflect. But now, not at the moment.”

That same report claims an official told her later she had to wear the medal and couldn’t refuse it.

From The Globe and Mail:

After leaving the ice heartbroken, and struggling to answer post-game questions for reporters, Larocque had almost made it to the dressing room when an official from hockey’s governing body pulled her aside and gave her a talking to.

Few people witnessed it, but there was Larocque, tears welling up in her eyes, holding her unwanted silver medal, being told by a man in a suit about the “legal” reasons why she can’t refuse to wear it. This was the Olympics, the official from the International Ice Hockey Federation explained. It doesn’t matter how sad you are. Or how angry, or disappointed. There are rules.

Several people noticed her refusal to wear the medal, and had some critiques for her on social media. Although not everyone was mean-spirited. Others understood her frustration immediately following a close loss.

So Jocelyne Larocque Of The Canadian female Olympic hockey team is a #PoorSport! You taking off your silver metal as soon as they put it on you is really good for the kids that look up to you. You should be showing them good sportsmanship!!! #USA #Gold

Feeling a bit sorry for Jocelyne Larocque. OK, it wasn’t the best idea to do that but in the final of a team sport like Ice hockey, you don’t win a silver medal, you get handed it because you lost. She was clearly crushed at the defeat. #USAvCAN #Olympics #TeamCanada #USA