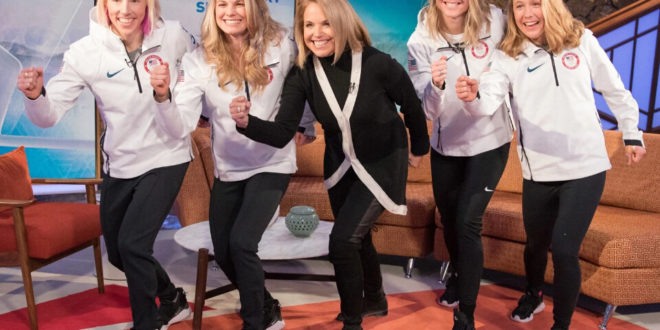 Google closing ceremony flag bearer Jessie Diggins and it’s almost impossible to find a photo in which she’s not smiling. Or at least smirking. The same goes from the rest of the U.S women’s cross-country team. And the PyeongChang Games have been no exception, with the women practically dripping happiness the past few weeks.

The examples are endless. For instance, the team’s bubbly interview with Katie Couric, or Diggins putting glitter on her face before every race – a tradition she calls “getting her sparkle on.”  Behind the scenes, team member Liz Stephen says they’ve held movie nights, played games and gotten haircuts together. “We genuinely love each other,” she said. “You don’t have to force smiles.”

To an extent, their exuberance stems from success. Diggins started the Games with the best-ever cross country finishes for an American woman (5th, 6th and 5th). But results by no means dictate their mood. “There is more to it than just medals,” said Diggins after one of the races. “It’s an honor and a privilege and [to] know you’re racing not just for yourself, you’re racing for your teammates.”

While the lightheartedness is now seemingly effortless, according to Stephen, “it hasn’t always been that way.”

Cross country ski racing has traditionally been thought of as a solo endeavor. “People were training in isolation,” explained Peggy Shinn, the author of World Class: The Making of the U.S. Women’s Cross-Country Ski Team.  “If you wanted to be a cross country skier, you did it alone.”

Historically, American cross country skiers have played second fiddle to their European, and especially Nordic nation, counterparts. One exception is Bill Koch, who helped popularize the skate skiing technique and, going into PyeongChang, possessed the United States’ sole cross country medal – a silver from the 1976 Innsbruck Games. But that never really spread to the rest of the U.S. team; a trend that continued into the 21st century.

In 2001, Kikkan Randall was named to the U.S. Ski Team; though, at the time, there wasn’t much of a team to speak of – it was still mostly a collection of individuals. Obscurity and mediocre results were fixtures of the American cross-country experience. That reached a new low at the 2005 World Championships in Oberstdorf, Germany, when the American women’s 4 X 5km relay team was taken off course for not being fast enough. “They finished dead last because nobody cared about them,”  Shinn said. No women were named to the U.S. Ski Team for  2005-2006 season, and funding was cut. “That was Kikkan’s lowest moment.”

Slowly, though, there’s been a resurgence. And a shift in attitude.

After a surprisingly strong American cross-country showing at the 2006 Turin Games, the U.S Ski Team recommitted funds to the women’s program. Stephen was among those added to the team as part of the expansion.

Within a few years, flickers of promise were producing steadier flames. In 2007, Randall became the first American woman to land on a World Cup podium. A year later, she collected her first World Championships medal (silver). The success provided the impetus for even further improvement, says Stephen. She recalls the team stepping back and asking itself, “what can we do to make this better?”

Stephen says that Matt Whitcomb, who was elevated to head women’s coach in 2011, played a major role in helping the team coalesce. By that point, the team had added Diggins, Sophie Caldwell, and Sadie Bjornsen, among others.

“In the beginning, it was a lot of meetings,” Stephen said, where everyone was encouraged to get to know one another better and air any grievances. Even the little things – like how Diggins wouldn’t wait for the coffee to fill before taking a cup, which apparently drove one of her teammates crazy. Diggins wasn’t even aware her habit was causing a problem until someone brought it up. The lesson, said Stephen, was: “If you have an issue, talk about it. Don’t stew over it.”

The group also instituted “Team Tuesdays,” where they would have to do something together. Movies didn’t count. At first it sometimes felt like a commitment, says Stephen. Soon enough, however, the gatherings just started happening on their own. Today, the group hangs out together all the time; Tuesdays or otherwise. “[There’s a] strong bond between people, not just teammates,” said Stephen. “I feel really lucky to be part of such a strong group of women.”

Diggins is a known instigator of team revelry. A few years ago she choreographed and organized a team dance. “It’s more than happiness,” said Shinn, describing the dynamic. “They’re trying to be the goofy family that gets along at Christmas.”

Stephen says that the U.S. women have started to spread their mentality to other national teams. Once, a Finnish skier was so touched by Randall’s invitation to train together that she broke down in tears. As moments like these accumulate, the previously hard edges of the sport are softening – with Team USA leading the way.

The ultimate expression of joy came last week in PyeongChang when Diggins and Randall won the team sprint. It was the first Olympic gold medal for the U.S. cross country team, and the only medal of any color for the women.  “The new era has been dawning for a number of years now,” Koch told Cross Country Skier magazine after the race. “But now, the sun just rose.”

The entire American women’s team was in attendance. Dancing, hugs and tears ensued. Other teams came over to join the celebration too. No jealousy, said Stephen, just pride.

Surrounded by the throng, Diggins and Randall grabbed an American flag and pulled it over their shoulders. Turning to one another after their decade long-journey to the top, their smiles beamed.