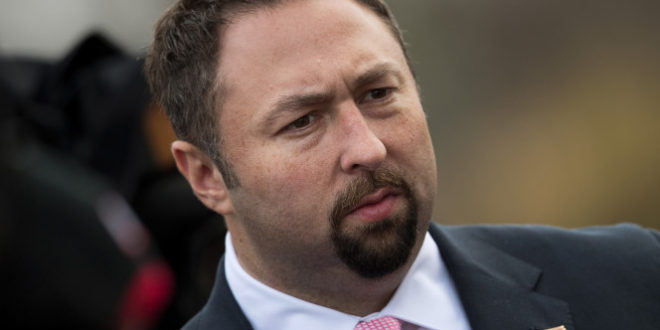 The very first sex scandal of Donald Trump’s presidency has just resulted in the birth of a love child.

Page Six exclusively reported that Miller and Delgado went to a Las Vegas strip club with members of the media the night before Trump’s final debate against Hillary Clinton in late October.

Miller confirmed the birth of their child on Wednesday.

In what feels like light years ago, Miller, who had been the chief spokesman for Trump’s fall 2016 campaign and presidential transition was tapped to be the White House communications director in December.

But he lasted even less time than Anthony Scaramucci, and turned down the plum job two days later.

Miller’s wife gave birth to their second child in January — but Miller was starting another family.

In December, Delgado sarcastically tweeted her congratulations to “the baby-daddy” on his promotion, cryptically adding, “The 2016 version of John Edwards,” referring to John Kerry’s vice-presidential nominee, who famously fathered a child with mistress Rielle Hunter.

Miller then resigned his White House job. Delgado deleted her tweets, changed her number and disappeared to Florida. A few days ago,

Delgado re-emerged, tweeting that she had given birth to a “beautiful son” named William on July 10.

Miller confirmed the birth of his child with Delgado and said his wife had, astonishingly, accepted the news. Miller said in a statement to Page Six, “My wife and I, along with our two daughters, are excited to welcome William into the world and into our family, and we appreciate the well wishes we’ve received from so many.”

Sources said Miller and Delgado have not talked since she revealed the news of her pregnancy and are communicating only through lawyers.

Delgado could not be reached by phone Wednesday, and didn’t respond to messages on social media.

Dear friends: Beyond thrilled to share with you that I’m now the proud mother of a beautiful son (!), William!!! Born 7/10