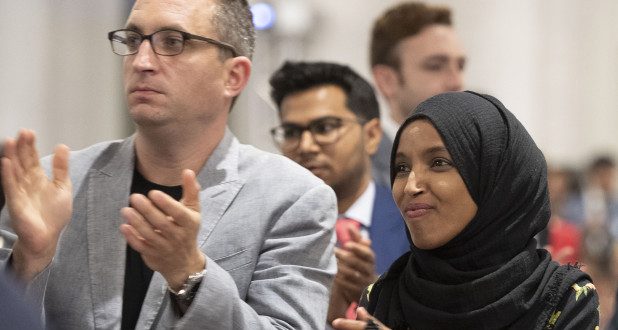 A Washington, DC, mom says her political-consultant husband left her for Rep. Ilhan Omar, according to a bombshell divorce filing obtained by The Post.

Dr. Beth Mynett says her cheating spouse, Tim Mynett, told her in April that he was having an affair with the Somali-born US representative — and that he even made a “shocking declaration of love” for the Minnesota congresswoman before he ditched his wife, alleges the filing, submitted in DC Superior Court on Tuesday.

The physician, 55, and her 38-year-old husband — who has worked for left-wing Democrats such as Omar and her Minnesota predecessor, Keith Ellison — have a 13-year-old son together.

“The parties physically separated on or about April 7, 2019, when Defendant told Plaintiff that he was romantically involved with and in love with another woman, Ilhan Omar,” the court papers say.

“Defendant met Rep. Omar while working for her,’’ the document states. “Although devastated by the betrayal and deceit that preceded his abrupt declaration, Plaintiff told Defendant that she loved him, and was willing to fight for the marriage.

“Defendant, however, told her that was not an option for him’’ and moved out the next day, the papers say.

“It is clear to Plaintiff that her marriage to Defendant is over and that there is no hope of reconciliation,’’ according to the filing.

The Mynetts lived together for six years before marrying in 2012, the filing said.

Omar — a member of “the Squad,” a group of far left-leaning female freshman House members including Rep. Alexandria Ocasio-Cortez (D-NY) and two others — recently separated from her husband, according to reports.

The 37-year-old congresswoman and mom of three paid Tim Mynett and his E. Street Group approximately $230,000 through her campaign since 2018 for fundraising consulting, digital communications, internet advertising and travel expenses.

Omar was spotted enjoying time with Tim Mynett at a California restaurant in March.

Beth Mynett is seeking primary physical custody of her and her husband’s son in part because of Tim Mynett’s “extensive travel” with Omar — which isn’t exactly part of his job description, the document says.

“Defendant’s more recent travel and long work hours now appear to be more related to his affair with Rep. Omar than with his actual work commitments,” the court papers state. 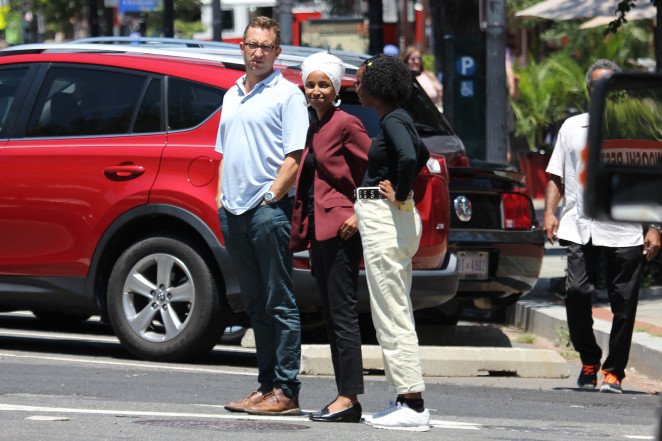 When he was home, “he was preoccupied and emotionally volatile,’’ Beth Mynett says of her estranged spouse. Meanwhile, the mom has been juggling “the vast majority of responsibilities related to [their son’s] school, medical care, and extracurricular activities,’’ the papers say.

The doctor argued that she doesn’t trust her husband’s judgment with their son anymore — in part because of his relationship with Omar.

“By way of example, days prior to Defendant’s devastating and shocking declaration of love for Rep. Omar and admission of their affair, he and Rep. Omar took the parties’ son to dinner to formally meet for the first time at the family’s favorite neighborhood restaurant while Plaintiff was out of town,” the papers state.

“Rep. Omar gave the parties’ son a gift and the Defendant later brought her back inside the family’s home,” the papers say.

Beth Mynett said in the filing that the most concerning thing about the excursion was her hubby’s decision to “put his son in harm’s way by taking him out in public with Rep. Omar, who at that time had garnered a plethora of media attention along with death threats, one rising to the level of arresting the known would-be assassin that same week.”

The physician said her husband “has a history of emotional volatility, that can cause him to become easily angered and rageful,’’ according to the papers.

She added that she used her contacts to help him launch and grow his career and financially supported him along the way — only to have him “conveniently asserting after their separation that he is nearly broke, and his business is floundering,” the documents show.

Tim Mynett, using “bullying tactics,” has “begun threatening not to pay for his share of their joint financial responsibilities,” Beth Mynett says in the complaint.

She is seeking full control of the couple’s DC home, child support and legal fees, according to the filing.

Omar’s husband, Ahmed Hirsi, is a former banker who was hired as a senior policy aide to a Minnesota city councilwoman last year, the Minneapolis Star Tribune reported at the time. Omar was previously married to Ahmed Nur Said Elmi.

President Trump has repeated a claim that the union with Elmi was illegal immigration fraud because he is her brother and that they wed so he could obtain American citizenship. Omar called that allegation “absolutely false and ridiculous.” 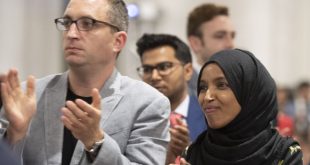