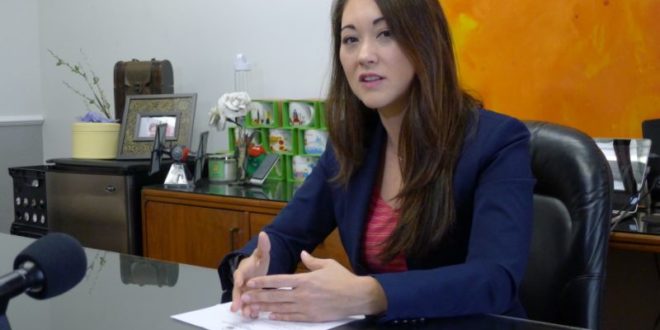 A Hawaii lawmaker who was ousted from her leadership post in the Republican Party after criticizing President Donald Trump has been accepted by the state’s Democrats.

The Democratic Party of Hawaii said Monday that a committee voted to accept Rep. Beth Fukumoto over the weekend.

Fukumoto was minority leader in the Hawaii House and was considered a rising star in the Republican Party. But she upset her Republican colleagues when she called Trump a bully and said his comments were racist at the Women’s March in Honolulu in January.

The unanimous vote by the Democrats was the final step for Fukumoto to switch parties, leaving just five Republicans out of 76 lawmakers in the Hawaii Legislature.

Fukumoto’s decision to leave the Republican Party was based on her colleagues’ reaction to her speech at the Women’s March and her feeling that there needed to be more pushback from Republicans about Trump’s views, she said.

“I just said this is not a party that I can be a part of anymore, and there’s not really a place for me here anymore,” Fukumoto said.

Former Republican Party Chairman Fritz Rohlfing said Fukumoto, who was recently elected as a Republican, should have resigned her seat in the Legislature to be replaced by someone else in the party.

“She hasn’t shown integrity in terms of the party that she came into office with, and I certainly hope that we will find a good person to run against her and recapture that district for a Republican representative,” Rohlfing added.

Fukumoto sought feedback from constituents before switching parties. She said most supported her move.

The response Fukumoto generated from around the country was overwhelmingly positive. Her office was flooded with letters from people in nearly every state thanking her for voicing what many people were feeling, Fukumoto said.

“It’s always worth having those conversations, even if it means you’re getting booed on stage or you’re losing your leadership position,” Fukumoto said.