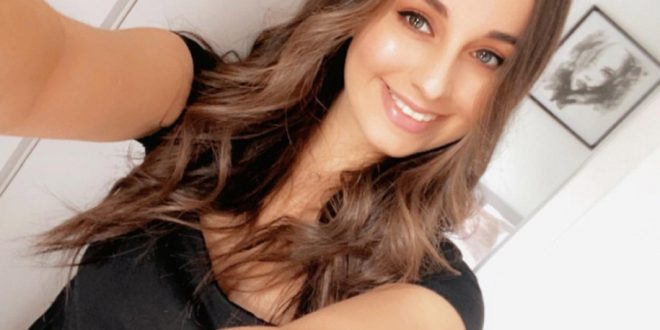 A 23-year-old former cheerleader has been found stabbed to death in her Melbourne, Australia, home after going to police about a former co-worker her family says had developed an obsession and stalked her, according to reports.

Celeste Manno and her mother, Aggie, were at their home when the alleged killer broken in through a window and attacked the young woman at about 4 a.m. Monday, the Sydney Morning Herald reported.

A 35-year-old man later turned himself in to authorities and remains under police guard in a hospital with unspecified injuries, according to the news outlet, which said he has not been charged.

Chilling crime scene photos show blood dripping down a fence outside the suburban home in Mernda, where a dark-colored Peugeot was seen driven off after the crime.

“How could I not protect her?” Manno’s mother could be heard screaming in anguish, 9news.com reported.

Manno’s brothers and boyfriend, Chris, arrived at the home, where floral tributes were left behind for the slain woman.

Her 19-year-old brother Alessandro told the Morning Herald that she was a team leader at a call center by global company Serco. Her alleged stalker was a former colleague who left the firm about a year ago, he said.

“He got fired and she wasn’t close with him at all but just to give him some support she walked him out the door, and ever since that day he has just been obsessed with her,” he said, adding that the man had created several social media accounts after Manno blocked him.

“It started at the start of the year, contacting her on Instagram … At first, she was nice to him and said she was not interested, and then he kept getting obsessive and eventually she had to block him and he created about a million other accounts,” Alessandro said.

He said his sister had reported her concerns to police.

“I hope justice does get served,” the grieving teen added.

Older brother Jayden, 33, described his sister as “the most intelligent one of all of us, the best of all us. She was loved by everyone – there [isn’t] a soul on this Earth who could ever say a bad thing. Such an amazing person.”

He said the family was struggling with the devastating loss.

“We need the government to listen. Everyone should have the right to live their lives. In their homes, in their bedrooms, on the streets. No one should be scared. Man, woman or child, this evil should not exist.

Manno, who was looking forward to celebrating her 24th birthday on Sunday, was excited to visit her new niece, Daisy, whom she had only been able to see a handful times due to coronavirus restrictions, the Morning Herald reported.

One of her colleagues said that some co-workers had been aware of the stalking allegations.

“I knew she had someone inappropriately infatuated but that was a while ago, a long time ago,” he told the outlet without giving his name. “I knew her reasonably well. I wish I knew her better. Everyone at work knew Celeste. Everyone.”

Another colleague who did not want to be named said she was wise beyond her years and had risen through the company ranks swiftly.

“She had a very positive energy. You wouldn’t think she was dealing with [any problems],” she said. “She definitely loved people and making people happy. She was always trying to look out for people, do whatever she could.

The co-worker added: “She was a strong girl, very strong. You wouldn’t see it because she was all about positive energy and gave us that positivity. I don’t think it was something she would ever want anyone to know.”

Several heartfelt messages were left at the family home.

“You were my angel. I love you always. Thank you for everything. Rest in peace,” one said.

Previous Dive Into The Blue: Five Styles Of Denim That Never Go Out
Next Love Island contestant, 26, ‘pockets $1.4m a month’ on OnlyFans