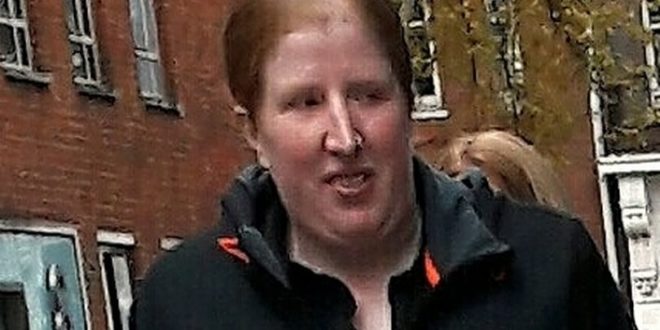 PC Charlotte Peters, who was jailed for 22 months last December, admitted gross misconduct and was dismissed without notice

A woman police officer who had sex with a rape victim in a McDonald’s toilet has been thrown out of the force.

PC Charlotte Peters, 33, became involved with the vulnerable woman when she was working for the Met’s Sexual Offences, Exploitation and Child Abuse Command.

They first kissed as Peters took the woman’s fingerprints before sleeping together in February last year.

Peters refused to leave her partner for the victim and she threatened to kill herself when the victim told staff at the refuge where she had been housed.

The officer was arrested on 17 March following an investigation by the Directorate of Professional Standards Specialist Investigations team.

Peters, who was on the Sexual Offences Investigative Techniques (SOIT) team, admitted misconduct in a public office.

She turned towards the public gallery and mouthed “I love you” to her partner as she was jailed for 22 months at Southwark Crown Court in December.

A Metropolitan Police misconduct hearing was told Peters, who has a master’s degree in sports science, joined the force in June 2006 and was posted to Islington borough.

She joined the Sexual Offences, Exploitation and Child Abuse Command in July 2015, working as a SOIT officer until her arrest and subsequent suspension.

Her commanding officer, Detective Chief Superintendent Ivan Balhatchet, said Peters was “a popular member of her team” who would have had a “promising career ahead of her.”

RELATED:  Drama teacher Pamela Stigger gave ’15-year-old pupil oral sex in the back of her car’

“Having considered the matter fully and having regard to the nature and severity of the breaches of the standards of professional behaviour, my decision is that PC Peters is dismissed without notice.”

Prosecutor Kate Bex had told the sentencing hearing how the affair was discovered after the victim told staff at the refuge because she was “tired of being her dirty little secret.”

“The fallout from that disclosure was inevitable. Staff told her they were obliged to report it.

“The victim withdrew what she had said to the staff member, then asserting it had been attention-seeking lies.”

The victim told police she was “in love with Ms Peters” adding: “I knew she would get in trouble, but I didn’t think there was anything wrong with it.”

Ms said Peters was trained to deal with the “emotional impact” on victims of sexual assault and would have been expected to recognise victims’ vulnerability.

“Ms Peters was in a position of trust,” she said.

Ms Bex said the victim “flirted” with Peters and “made it clear to her that she found her attractive and therefore in her own words she encouraged it”.

Later the pair had sexual intercourse in the “lavatories at McDonald’s”, Ms Bex added.

Peters, of Hatton Place, Luton, Beds, admitted one count of misconduct in a public office.

She admitted gross misconduct and was dismissed without notice.

RELATED:  Teacher, 28, had sex with teenage pupil in her home after husband invited him over and plied him with booze