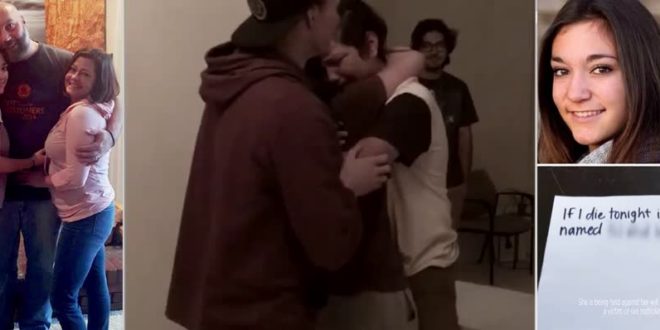 This is the emotional moment a 17-year-old girl allegedly abducted by sex traffickers is reunited with her family more than a month after she vanished from a Las Vegas hotel.

Sarah Dunsey was rescued by the FBI in California on Friday after disappearing from the MGM Grand Hotel while holidaying with friends.

In the video, which was posted on the missing person’s page, she can be seen embracing her brothers.

It was accompanied by the comment:”Sibling love. It was an emotional reunion last night!”

In a photograph shared on Sunday, the teenager from Logan, Utah, appeared smiling and without any facial injuries as she was reunited with her father and stepmother.

“Feels so amazing to hold this beautiful young lady in our arms again!! Thanks again to everyone,” Terri Dunsey, the teen’s stepmother, told Facebook friends.

Her stepfather Todd said on Monday it was a “miracle she was back with the family alive, and they were all “exhausted” after what had happened to her.

He told the Dailymail.com : “No parent or child should have to experience what we have been through. We are thankful for all the good people that helped in the recover of Sarah. This was truly a miracle.”

Sarah has a four stepbrothers and a full brother and sister.

She lives with her mother and her stepfather Todd Ellis in St George, Utah.

Her father Michael lives in Logan with his wife Terri and her two children.

RELATED:  Why This Teacher Who Slept With Students Will Not Have to Register as Sex Offender

The family launched a widely-shared social media campaign to find Sarah last week after she went missing on January 15.

Sarah was found with two men at a hotel in Venice, and they have been questioned by police.

The FBI have not confirmed she was taken in connection with human sex trafficking.

Cops have refused to say whether there have been any arrests in relation to her disappearance.

When she disappearance, her mother Amie made a video plea to her daughter, telling her to “fight” the mysterious sex traffickers who the family feared kidnapped her.

Police are yet to make any suggestion over the circumstances surrounding the case but Sarah’s family are adamant in their belief she was trafficked for sex work.

Previous TV worker claims she was sacked from job at production company for being “too good looking”
Next Glamour model who promised sex acts to 19.4million referendum voters to begin X-rated tour of the UK