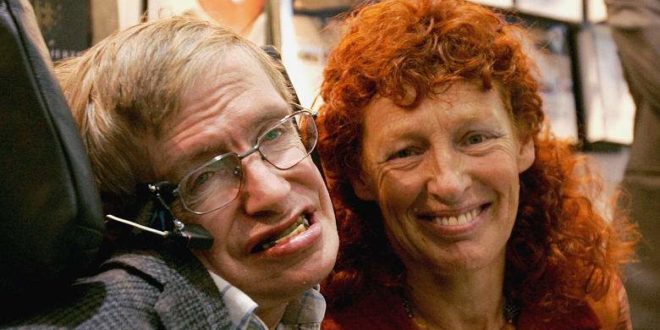 Stephen Hawking has died. The theoretical physicist was diagnosed with amyotrophic lateral sclerosis (ALS) when he was in his early 20s and lived with the debilitating disease for several decades. Over the years, his body deteriorated, leaving him paralyzed.

His death was confirmed by his family on March 14. He was 76 years old.

Elaine Mason (nee Lawson) was Stephen Hawking’s second wife. She married him in 1995, after he split from his first wife, Jane Hawking, with whom he had three children.

Mason and Hawking did not have any children together. The two were married for 11 years before splitting in 2006.

Here’s what you need to know:

1. She Worked as a Nurse & Met Hawking in the 80s When She Took a Job as One of His Caretakers

Mason was a British nurse who worked with children at an orphanage in Bangladesh when she first started out. After four years, she met and married her first husband, David Mason.

The Masons met Hawking when Elaine took a job as his caregiver in the 80s. At the time, David Mason worked as an engineer and was slated to help Hawking on a speech synthesizer — the one that Hawking himself created.

According to Vanity Fair, David Mason noted that he was a big fan of Hawking, saying that he “worshipped” him.

Hawking was also married when Mason started working for him, but the two grew very close to one another and ended up falling in love.

Mason left her husband of 15 years and their two sons to pursue a life with Hawking. Professor Hawking also left his family behind, getting a divorce from Jane and getting remarried to Mason less than one year later. The two exchanged vows on September 15, 1995, at the Cambridge Register Office. You can see a photo from their wedding day here.

Many people felt as though Mason married Hawking for money, but it is something that she had always denied.

Hawking and Mason both filed for divorce in 2006 after 11 years of marriage.

At the time, it was unclear why Professor Hawking and Mason decided to go their separate ways, but there were plenty of rumors floating around. For example, some people believed that Hawking had been cheating on Mason — with another one of his caregivers — but sources close to him vehemently denied any such thing.

“That is complete and utter libelous rubbish,” a source close to Hawking told The Telegraph at the time.

When the media asked if Professor Hawking would be commenting on his divorce, his secretary, Judith Croasdell, said that he would not.

“He is far too busy. This is just a distraction which is really annoying. We don’t have any time for any of this. We have no interest in any of the gossip that is going on,” she said, according to the Evening Standard.

3. She Was Previously Accused of Abusing Hawking

Over the course of their marriage, there were quite a few rumors that circulated. For example, Mason was accused of “physically and emotionally” abusing her husband.

An unnamed woman who once cared for Hawking spoke with the Daily Mail shortly after Hawking and Mason parted ways. She told the outlet that Mason didn’t treat Hawking properly.

“Well I’m not surprised. Not surprised at all – I just wish it had happened a long, long time ago,” the woman said. “She is the reason I left. It’s the reason everyone leaves. It’s impossible to reconcile the way she treated Stephen with the ethics of our profession. I don’t want to say anymore because it brings back painful memories,” she added.

According to that report, many people close to Hawking felt similarly about Mason and expressed such. Another former employee referred to Mason as “controlling and manipulative.” She was even accused of “bullying.”

The police were informed of these concerns, and Mason was formally investigated. Hawking himself publicly denied the claims, despite showing up at the hospital in 2000 with “cuts and bruises” that he couldn’t explain.

Three years later, his daughter, Lucy, called police over concerns that her dad was being mistreated. Lucy spoke with Vanity Fair about the ongoing abuse that she says her dad suffered at the hands of Mason.

Below are some of the injuries and emotions that Hawking suffered over the years, according to the Daily Mail.

“[She] fractured his wrist by slamming it on to his wheelchair; humiliated him by refusing him access to a urine bottle, leaving him to wet himself; gashed his cheek with a razor, allowed him to slip beneath the water while in the bath, ensuring water entered the tracheotomy site in his throat; and left him alone in his garden during the hottest day of the year so long that he suffered heatstroke and severe sunburn.”

But Hawking stood his ground.

“I firmly and wholeheartedly reject the allegations that I have been assaulted,” he said, according to Vanity Fair.

Hawking’s first wife, Jane, was sick over the rumors and spoke to the media about her take on the situation.

“The revelations have made me feel ill. He is a special man and vulnerable man but, when his children see the aftermath of these events, they can only tell him he must do something about it,” she said.

On March 29, 2004, police dropped the case, saying that their investigation was “extremely thorough,” according to Vanity Fair. Mason was never charged.

4. She Made Money in the Divorce

Mason walked away from her marriage with more money than when she went into it.

According to Vanity Fair, she and Hawking owned a $3.6 million “chalet-style home in Newnham.”

Additionally, Hawking had been earning money from various avenues, including the sale of his book, A Brief History Of Time. It’s unknown exactly how much money Mason ended up with, but a source close to the family mentioned that the divorce was taking a while because of discussions about money.

“I have been told that – surprise – one of the stumbling blocks in the divorce is money,” an old family friend told the Daily Mail.

Before the two split, Hawking’s only daughter, Lucy, was concerned that Mason would get all of his money if he died.

“Well, it’s a worry,” she told Vanity Fair back in 2004. “I mean, at some point you ask yourself, Is it really worth it? I mean, the pain and the struggle we’ve been through, if this all turns out to be about money, well, then—she can keep it and I hope she chokes on it,” she added.

It is unknown if Hawking had a will or if Mason will be getting any money following his death.

5.  Actress Maxine Peake Played Her in ‘The Theory of Everything,’ But Mason Hasn’t Personally Been in the Spotlight Since Her Divorce From Hawking

Elaine Mason has not publicly commented on Hawking’s death. In fact, not much about Mason has been reported on since she and Hawking divorced.

In 2014, the film The Theory of Everything was released. The movie, which starred Eddie Redmayne as Stephen Hawking, told the story of Hawking’s life, with a focus on his first wife, Jane. Actress Maxine Peakeplayed the role of Elaine Mason in the film.

“‘The Theory of Everything’ is the story of the most brilliant and celebrated physicist of our time, Stephen Hawking, and Jane Wilde the arts student he fell in love with whilst studying at Cambridge in the 1960s. Little was expected from Stephen Hawking, a bright but shiftless student of cosmology, given just two years to live following the diagnosis of a fatal illness at 21 years of age. He became galvanized, however, by the love of fellow Cambridge student, Jane Wilde, and he went on to be called the successor to Einstein, as well as a husband and father to their three children. Over the course of their marriage as Stephen’s body collapsed and his academic renown soared, fault lines were exposed that tested the lineaments of their relationship and dramatically altered the course of both of their lives.”

Previous PARIS DYLAN KNOWS EXACTLY HOW TO GET OUR ATTENTION
Next A game on China’s WeChat messaging app has gone viral, and Nike and McDonald’s want in