Relatives of the Fordham University student who plunged to her death in a campus clock tower are “crushed” and still “trying to make sense’’ of what happened, a family friend told The Post on Monday.

“Her parents and sister are heartbroken to say the least,” said David Barfield, a college friend of Sydney Monfries’s devastated father.

Monfries, 22, and a group of pals snuck into an off-limits area of the Bronx campus’s Keating Hall tower early Sunday to touch its bell and snap photos, a well-known ritual for graduating seniors.

But the fun time took a tragic turn when the journalism major lost her footing and tumbled 40 feet to her death.

“The world has lost a wonderful person,’’ he said.

A fellow senior said Monday that she’s dreading her upcoming graduation next month — because it’s slated to take place in front of the tower where Monfries died.

“The mood on campus has been very depressing,” said the student, who declined to give her name. “It’s gonna be difficult to graduate in front of this building.

“This is where she died. We’re all gonna be thinking about it.”

A school spokeswoman did not respond to an inquiry about whether the commencement might be moved to a scene free of the grim association.

But the rep said did say that the students who joined Monfries in the tower — which the school has insisted is “always locked” — will not be disciplined. 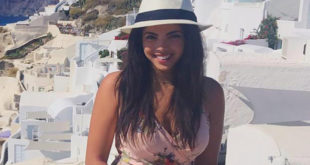