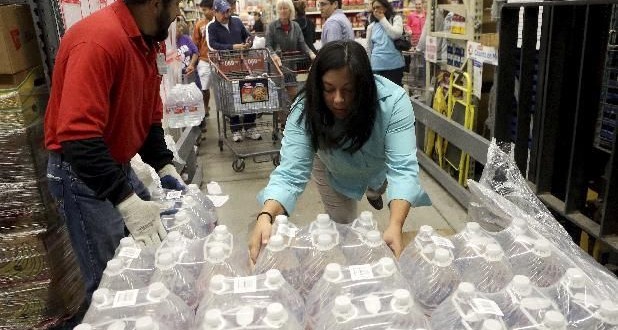 DALLAS (AP) — A chemical leak from an asphalt plant that led Corpus Christi officials to warn residents this week not to drink the water was apparently reported a week earlier, according to an email from a state environmental official that was obtained Friday.

The internal email sent Wednesday by Susan Clewis, a regional director for the Texas Commission on Environmental Quality, contained an incident report that described the leak as a “backflow incident from a chemical tank impacting the public water system.” It was reported Dec. 7 at a plant run by Ergon Asphalt and Emulsions.

The email doesn’t say who initially reported the leak on Dec. 7 or to whom. It says the state environmental agency was notified around 3 p.m. on Wednesday. City officials notified the public that evening.

“Obviously we are concerned about that initial report, that this may have been known for seven days and it may have been going on for that long. And why did it take so long for TCEQ to get notified?” asked Luis Moreno, chief of staff for state Sen. Juan Hinojosa, whose district includes Corpus Christi. “Those are all things that I think are starting to be figured out right now.”

Dan McQueen, the mayor of the Gulf Coast city of about 300,000 people, has said local officials also only learned of the leak on Wednesday.

Neither Clewis nor city officials responded to requests for comment on Friday, when many schools remained closed for a second day.

The TCEQ report indicates that a combination of Indulin AA-86 and hydrochloric acid leaked into the water supply.

Indulin is an asphalt emulsifying agent that’s corrosive and can burn the eyes, skin and respiratory tract if a person comes into contact with concentrated amounts. The amber liquid is considered a hazardous material by the Occupational Safety and Health Administration and could cause damage to internal organs.

“You don’t expect to see it in water,” said Terry Clawson, a spokesman with the Texas Commission on Environmental Quality.

Up to 24 gallons of it may have seeped into a pipeline carrying water, allowing it to move to other areas of the city, Kim Womack, a spokeswoman for the city, said Thursday.

Ergon has said in a statement that it has been in contact with the TCEQ and was “working cooperatively to provide all information to ensure state officials can remedy the situation as quickly as possible.” Bill Miller, a company spokesman, declined to explain Friday how a hazardous chemical may have entered the water supply.

State and city officials have referred to a “backflow problem” at the plant, and Womack said inspectors didn’t find a device in place that prevents contaminated water from flowing backward into a potable water supply. Ergon, though, has argued that the plant does have a prevention device, Womack said.

State and federal environmental records list no problems at the plant over the past five years. Nationwide, the Environmental Protection Agency reports no current “significant violations” at Ergon facilities but shows seven receiving fines since 2010, the highest $17,200 paid by a Vicksburg, Mississippi, refinery.

A Texas Commission on Environmental Quality record lists an emergency response at the site on March 24 as having been closed. Clawson, the agency spokesman, said he had no details.

Meanwhile, city officials on Friday continued to ease restrictions on the use of tap water while workers flushed water pipes to make sure any remnants of the chemical are removed.

Limited use of water is allowed in some neighborhoods. Water can be used for showering and washing clothes, but not yet for drinking. They warn that young children and those with weakened immune systems should avoid bathing so as not to accidentally swallow the water.

Officials said Thursday that residents in some parts of the city can consume water however they wish, but there were still sections Friday where authorities urged no use at all.

In additional to shuttering schools, the leak also continued to disrupt commerce. Officials said plenty of bottled water has been donated to help residents.

City officials have said that no one has turned up at area hospitals with symptoms that might indicate they were sickened or burned by the chemical. A city councilman, Michael Hunter, told the Corpus Christi Caller-Times that it was unlikely the leaked chemical was concentrated enough to do harm, but that every precaution must be taken.

The incident is the latest in a string of water scares for Corpus Christi. In May, the city issued its third boil-water advisory in a year as a precaution after nitrogen-rich runoff from rain flowed into the water system, resulting in low chlorine disinfectant levels in the water supply.

Boil-water notices were issued last year because of elevated levels of E. coli and another for low chlorine levels, the Caller-Times previously reported. The notices mirrored two others that were issued in 2007.

City crews have worked to reconfigure some water mains to ensure that water keeps circulating and to prevent bacteria growth. But an overarching concern is an old water system where more than half of 225 miles of cast-iron pipe needs to be upgraded.

No, thanks.
Previous Philippines’ Duterte to US over aid issue: ‘Bye-bye America’
Next Ryan Reynolds and Blake Lively Finally Debuted Their Daughters to the World