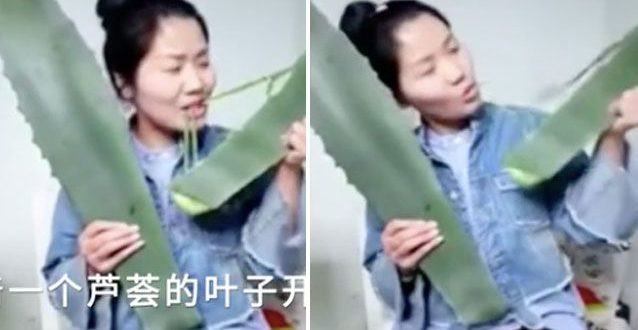 ‘That is bitter’: Blogger rushed to hospital after accidentally eating poisonous plant live on camera

A 26-year-old blogger has been rushed to hospital after accidentally eating a posionous plant live on camera.

Last Monday, the Chinese vlogger, known as Zhang, filmed a live video called “Aloe Vera feast,” where she chewed on what she believed was a leaf from the plant.

But Zhang had accidentally eaten the poison desert plant, agave Americana, according to The Mirror.

The video shows the young woman initially commenting on the taste of the plant, saying it was “great.”

Zhang then starts to notice a change in flavour, telling her concerned viewers: “Oh, that’s bitter. That is really bitter.”

The blogger was forced to abandon the live stream after she started losing her voice and felt as if her “throat was on fire.”

She took herself to hospital where she had her stomach pumped and is in a stable condition.

Previous Tourist faints in store after breaking $44,000 bracelet
Next A non-Apple smartwatch that you’ll actually want to wear