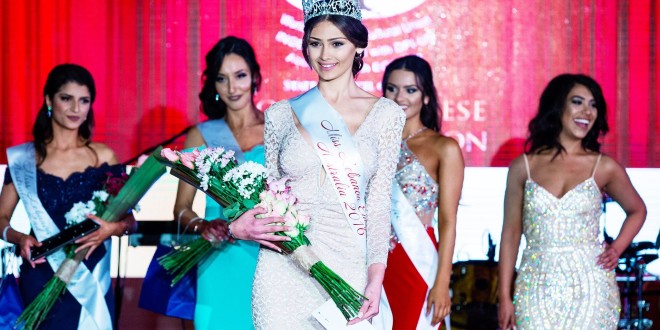 She was forced to pull over when her tyre burst in Derribong Street, Villawood and officers questioned her and her 20-year-old male passenger, The Daily Telegraph has reported.

Officers allegedly seized 22 grams of the drug ice and a large sum of cash from the man.

He was charged with drug offences and granted bail to appear at Bankstown Local Court on February 22.

Ms Ghamrawi was fined more than $1,350 for failing to wear a seatbelt and not displaying P-plates.

She has since not been answering calls from the Miss Lebanon Emigrant Australia pageant organisers despite them being interested in speaking with her, News Corp has reported.

A woman who said she was her aunt denied to The Daily Telegraph that her niece was involved in the incident.

“These are completely false allegations,” she told the newspaper.

“Najah was not in a car and was not taken to a police station. It’s complete rubbish.”

The Daily Telegraph has reported that Ms Ghamrawi’s mother Linda emailed the pageant organisers saying: “these allegations against my daughter are incorrect”.

Pageant organisers are angry that Ms Ghamrawi has ignored their call and emails requesting information about the incident.

They said they would strip her of the title she won in July as soon as she got in touch with them.

The oganisers told News Corp it was not the image they wanted to present.

“Empowering young adults who are less fortunate is definitely a career path I will pursue wholeheartedly,” she wrote.