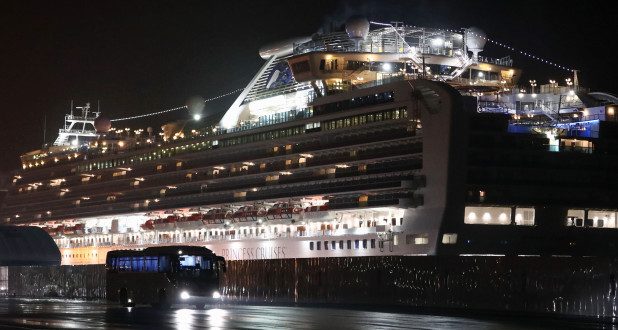 An American lawyer and his wife are refusing to evacuate the coronavirus-stricken cruise ship docked off the coast of Japan — because they say they feel safer aboard.

Matthew Smith, who has been quarantined on the Diamond Princess with his wife Katherine since early February, said he plans to stay put as the US on Sunday began to remove hundreds of  American passengers from the boat.

“Incredibly disappointed that the U.S. Government has decided to throw a monkey wrench into the quarantine we have maintained here on board the Diamond Princess,” Smith tweeted.

Smith said he’s skeptical about the government’s plan to evacuate citizens on two flights to the US, since some of the travelers could be sick.

The evacuated passengers were set to be screened for symptoms before boarding the planes back home.

“If we stay on board through next week, we will be tested and will likely come up negative,” he tweeted.

“But the U.S. Government instead wants to take us off without testing, fly us back to the U.S. with a bunch of other untested people, and then stick us in 2 more weeks of quarantine? How does that make any sense at all?”

The US embassy in Japan sent a letter to American passengers and crew members Sunday morning announcing the flights, adding they were the “only opportunity for eligible passengers to fly to the United States until March 4, 2020, at the earliest.”

Smith told USA Today that passengers were prompted to RSVP to the US embassy to tell them whether they’d be leaving.

The lawyer, who has been posting daily updates about life on the locked-down ship, tweeted that American health personnel had visited his room “until they learned, to their apparent surprise, that we had chosen to stay, at which point they moved on.”

RELATED:  What coronavirus? A new fever is now spreading in Florida

The evacuated passengers will be screened by the CDC, and anyone exhibiting symptoms won’t be allowed on the flights, officials have said.

Those who make the flight will likely be taken to Travis Air Force Base near Sacramento, Calif., or to Lackland Air Force Base in San Antonio, where they will undergo mandatory testing and further quarantine.