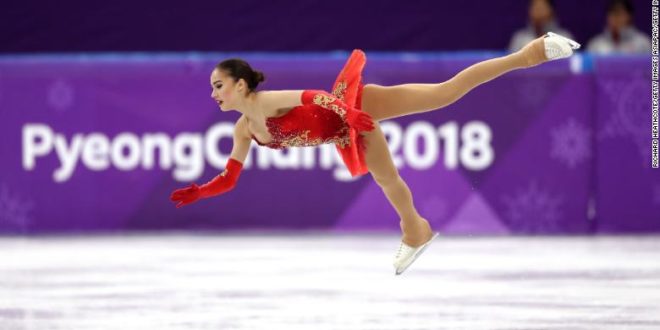 during the Ladies Single Skating Free Skating on day fourteen of the PyeongChang 2018 Winter Olympic Games at Gangneung Ice Arena on February 23, 2018 in Gangneung, South Korea.

(CNN)Alina Zagitova has won gold in the women’s ice skating, becoming the first Russian athlete to win the top medal at the Pyeongchang Winter Olympics.

After a stunning showdown at the Gangneung Ice Arena, the 15-year-old took the top spot after her rival, 18-year-old fellow Russian Evgenia Medvedeva, just couldn’t quite catch her.
Both women scored 156.65 in the free skate, but Zagitova’s 1.31 extra points in the short program on Wednesday put her over the edge, meaning Medvedeva had to settle for silver.
Intense attention has been paid to Russian athletes at this year’s Olympics, after the country was banned from competing due to allegations of widespread, state-sponsored doping.
More than 160 athletes who could prove they were clean from doping are competing as Olympic Athletes from Russia (OAR), under the Olympic flag and anthem.
Canada’s Kaetlyn Osmond took the bronze medal, adding to her gold already won in the team competition.
Medvedeva burst into tears following her performance, to “Anna Karenina,” as the crowd in South Korea showered her with love and stuffed toys.
She then shared an emotional embrace with her younger compatriot, both have spoken about their friendship off the ice, even if their intense rivalry on the ice takes a toll.
Russian fans who spoke to CNN at the Gangneung Ice Arena were largely backing Zagitova, with one woman saying “we like Medvedeva very much, but Zagitova is more strong.”
Another fan was more magnanimous about a Russian one-two: “Gold, silver, doesn’t matter which!”

Figure skating is renowned for its intense rivalries — Tonya Harding and Nancy Kerrigan, Brian Boitano and Brian Orser, Michelle Kwan and Tara Lipinski — but this one seemed to come out of nowhere.
Medvedeva is a former World Junior Champion, European Champion, and World Champion. In the 2016/17 season, she won first at every event she skated in.
Then the 15-year-old from Izhevsk, in Russia’s Volga region — who had only been competing internationally for a year — beat her at the most recent European Championships in January, and suddenly, everything was up for grabs.

Zagitova underlined this in the short program Wednesday, breaking a world record set by Medvedeva only minutes before. She described that as “the best performance of my life,” but added she still had room to grow.
In the end it was that skate which earned her the gold.