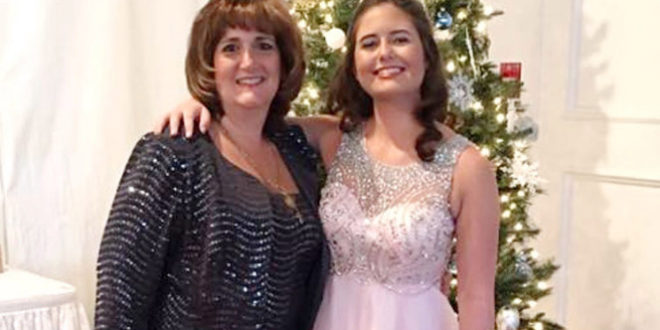 A Long Island mom died on Mother’s Day saving her daughter from being mowed down by an out-of-control motorist, police said.

Diane Aluska, 55, pushed her 16-year-old daughter, Jenna, from the path of a Toyota Corolla barreling toward them in reverse in Lindenhurst, authorities said Sunday.

“There is no doubt she saved her daughter’s life,” Suffolk County police Detective Sgt. James Murphy said of Diane Aluska.

The mother and daughter had just attended Mass at Our Lady of Perpetual Help Roman Catholic Church and were walking down South Wellwood Avenue at 9:15 a.m., officials said.

That’s when they were struck by an 80-year-old driver who had backed out of a bakery’s parking lot onto Wellwood Avenue, police said. The driver believed she had thrown the car into drive — but still had it in reverse, police said.

When motorist Ann Riolo hit the accelerator to go forward, she instead kept going backward and jumped the curb.

“She did not put the car in drive, thought she had, and hit the gas,” Murphy said.

“The car arched back towards the sidewalk, missing three parked cars and hitting the two women.”

The teen largely avoided Riolo’s 2005 Toyota, but Aluska took the brunt of the collision, according to Murphy.

“Diane Aluska … put her hand on her daughter’s shoulder and attempted to push her out of the way,” Murphy said.

The mom and daughter were both taken to Good Samaritan Hospital in West Islip where Aluska died. Her daughter was listed in stable condition, police said.

Riolo remained at the scene and will probably not be criminally charged, police said.

She was eventually taken to Good Samaritan Hospital for treatment of minor injuries.

The mom and daughter had left church, then went to a bakery before they were struck, witnesses said.

The street was strewn with rolls from the bakery and carnation flowers.