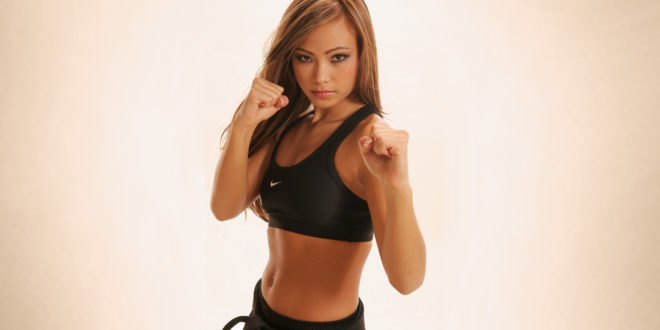 Michelle Waterson is a UFC fighter from Aurora, Colorado. The 31-year-old boasts a professional record of 14-4 with three wins by way of knockout, nine by submission, and two by decision. Currently, Michelle fights in the strawweight division, but she also spent time at atomweight earlier in her career.

[ngg_images source=”galleries” container_ids=”241″ display_type=”photocrati-nextgen_basic_thumbnails” override_thumbnail_settings=”0″ thumbnail_width=”240″ thumbnail_height=”160″ thumbnail_crop=”1″ images_per_page=”6″ number_of_columns=”0″ ajax_pagination=”1″ show_all_in_lightbox=”1″ use_imagebrowser_effect=”0″ show_slideshow_link=”1″ slideshow_link_text=”[Show slideshow]” order_by=”sortorder” order_direction=”ASC” returns=”included” maximum_entity_count=”500″]Michelle made her professional MMA debut on February 16, 2007, beating Andrea Miller by unanimous decision in a strawweight bout at Ring of Fire 28: Evolution. She bounced around several promotions before really making a name for herself in the Invicta Fighting Championships. Michelle went 3-1 in her four fights in the IFC, which all took place at atomweight.

On April 5, 2013, Michelle defeated Jessica Penne via an armbar submission to win the Invicta FC Atomweight Championship. She would make one successful title defense against Yasuko Tamada before dropping her belt to Hérica Tibúrcio via a guillotine choke submission on December 5, 2014.

After losing her championship, Michelle made the jump to the UFC. Since joining the promotion, Michelle has fought at strawweight, and she is 2-0 with both of her wins coming via rear-naked choke submissions. In Michelle’s most recent bout, she defeated Paige VanZant on December 17, 2016, earning a Performance of the Night bonus for her impressive effort.

Up next for Michelle is a date with Rose Namajunas at UFC on Fox: Johnson vs. Reis on April 15, 2017. Let’s do our part in wishing Michelle good luck by taking a look at her hottest photos in the gallery above.