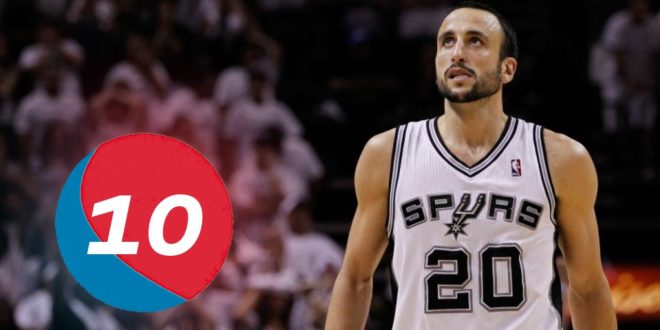 Manu Ginobili is one of the greatest overseas players

Manu Ginobili hasn’t officially said he’s retiring yet, but if Monday night’s tribute from fans, teammates, opponents and his coach was any indication, it’s possible we just saw the Argentinian’s final NBA appearance.

Steph Curry steps off the FT line to clap for Manu pic.twitter.com/nGwaNHGsSR

All we know is Ginobili was overwhelmed by the tribute:

Very hard to find the words to describe my feelings after yesterday’s game. Still overwhelmed. Thank you SO very much!

While we wait to hear what the 39-year-old legend will decide to do, at least we can ask ourselves an important question: What is Ginobili’s legacy?

Let’s start with some of his accolades: A Sixth Man award, two All-Star appearances, two All-NBA teams, an Olympic gold medal and, of course, a whopping four championship rings with the San Antonio Spurs. Oh, and one swatted bat.

This might be the one time you shouldn’t pay too much attention some of his “mainstream” stats – if he’s done, he’ll end with 13.6 points per game, 2.9 rebounds and 3.9 assists.

But what about those 1.4 steals per contest? Those are huge. Or the fact that his PER (20.59) is good for 58th all time, better than Bob Cousy’s and nearly as good as Allen Iverson’s?

Let’s throw this fact in here (although we know Ginobili has played in 213 postseason games, which helps):

And this one ( Net Rating for players “is the team’s point differential per 100 possessions while he is on court”) which tells you how valuable he’s been on both ends of the floor, and also how good the Spurs are in general under Gregg Popovich:

If Manu Ginobili retires, he’ll do so as the all-time, on-court NetRtg king. pic.twitter.com/gZUmt4ryxz

But this goes beyond the numbers. Ginobili played the game with such intensity and beauty. Watching him speed to the hoop was always an absolute thrill because you weren’t sure what he’d pull out from his bag of tricks, and his flair – whether it was making a highlight-reel pass or throwing down a surprisingly thunderous dunk – somehow didn’t come off as showy. It was brilliant.

Let’s not forget his influence on the game – the “Euro-step” became an NBA weapon thanks to Ginobili helping popularize it, as James Harden can attest to. And there’s this quote from Pop about what kind of teammate he is (via NBA.com):

“I mean, this is a Hall of Fame player who allowed me to bring him off the bench for … the last decade or something, because it would make us a better team.”

Where does that land him? Among the five greatest international players. Tim Duncan (if you count the St. Croix native, which I do), Hakeem Olajuwon and Dirk Nowitzki are tops on the list. Canadian Steve Nash is probably next. Then? You have to name Ginobili, for all that he’s done for the Spurs, his country and, most of all, the game itself.

Previous Rachel Lindsay Can Date A Man Of Whatever Race She Pleases, Okay?
Next Cop lets stoned driver go, she drives into river and dies