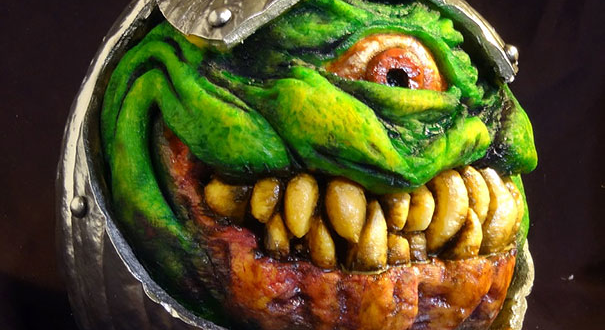 Halloween Decoration Ideas:Want to Terrorize the Neighborhood Kids This Year? Try One of These Pumpkins.

Halloween Decoration Ideas:Want to Terrorize the Neighborhood Kids This Year? Try One of These Pumpkins.

With Halloween coming up, it’s time to start thinking about how you’re going to deck out your pumpkin. You could go the traditional route and slice out some triangular features and a toothy, grinning mouth. Or maybe you could make something spookier?

Even if you opt for one of those fancy pumpkin-carving kits, you probably won’t reach the heights of pumpkin-carving glory that Jon Neill has. Neill, a sculptor and member of the Laguna College of Art and Design, makes pumpkins that are to die for. He has an impressive arts career, starting out as a film artist, working for Universal Studios and on the set of Jurassic Park.

He can carve you a pumpkin so you can traumatize your neighborhood’s children or your employees. He does it by carving into the thick rind of the pumpkin, rather than cutting all the way through it. He creates lifelike faces of monsters and other ghoulish creatures. His process is careful, shaving off layers of the squash’s flesh to create the images.

This one doesn’t look too happy about its company. A nice touch is how the tongue is made from the outer rind of the pumpkin.

The carvings are created by shaving off thin layers, so Neill can use as much of the pumpkin flesh as possible.

Sometimes there are additions.

Even the shine on the eyes is created by carving the pumpkin at different levels.

I always figured this was what Pac-Man really looked like.

Neill’s carving isn’t limited to pumpkins, and he’ll use the natural features of the squash in the carvings as well.

This giant squash was turned into some kind of terror fish for the holiday.

RELATED:  Why We Love Halloween

Neill’s work is so impressive it’s landed him a spot on the Food Network’s October special, Halloween Wars, which is shown on Sundays through the month. He also hosts carving demonstrations. Check his site for details.

Previous Set The Mood This Halloween With Some Totally Creeptastic Candles
Next This Kid Had a Totally Awesome Idea for Handing Out Candy on Halloween.