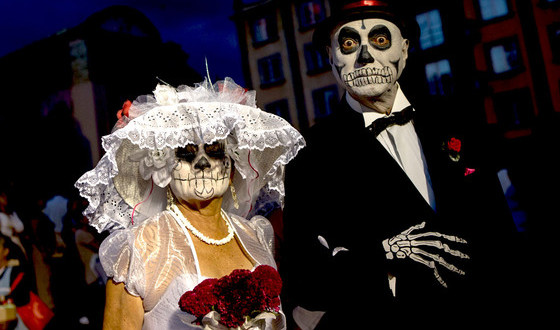 Day Of The Dead

The Day of the Dead celebrations might seem to be very similar to Halloween. In both celebrations people dress up in costumes, there are a lot of skeletons everywhere, and there are special sweet treats and candies given out. Also people spend a lot of time in graveyards and death imagery is everywhere.
But there are some big differences between the holiday that promotes fear of the dead and the holiday that celebrates the dead. The Day of the Dead holiday is about celebrating the dead, not being afraid of the dead. Itâ€™s a holiday for people to honor their ancestors and loved ones who have passed away and invite those spirits back into their homes to be part of the family once more. Itâ€™s a celebration of family and a show of respect for those who have passed away.

Day Of The Dead History The practice of celebrating the dead goes back thousands of years in South American cultures. In the Aztec culture the celebration of the dead was in August and went on for a month. During that time the people paid tribute to Catrina, the Goddess of Death, who was portrayed as a skeleton.
When the Catholic faith became entrenched in South America the festival of the dead was changed into the Day of the Dead and timed to coincide with All Saints Day and All Souls Day. November 1st and 2nd are national holidays in Mexico and other South American countries. During those days people welcome back the spirits of the family members that they have lost.

They pay their respects to their loved ones by tending to their graves, cleaning up graveyards, planting flowers and trees, and leaving offerings at the graves. They also wear the clothes of their deceased relatives, paint their faces as skulls or wear skeleton masks and costumes, and build altars in their homes to honor their loved ones.

Offerings of sweets, special bread, and the same foods and drinks that the family members loved in life will be placed on the altars along with marigolds to draw the spirits of the family members who have crossed over. Marigolds are said to attract spirits so they are visible everywhere during Day of the Dead celebrations.

One of the most well known ways that people celebrate the Day of the Dead is to turn themselves into skeletons using elaborate makeup and masks. The skeletal appearance highlighted with flowers, bright colors and artwork is a striking image that has now become an icon of the Day of the Dead. These looks are based partly on the decorated sugar skulls that are left on altars as offerings to the spirits and partly on a piece of artwork called La Calavera Catrina. Itâ€™s a zinc etching that was created at the turn of the 20th century and is a depiction of the Goddess of Death wearing a very fancy hat with lots of flowers. That image has inspired over a hundred years worth of stunning sugar skull makeup.

Tags Day Of The Dead halloween