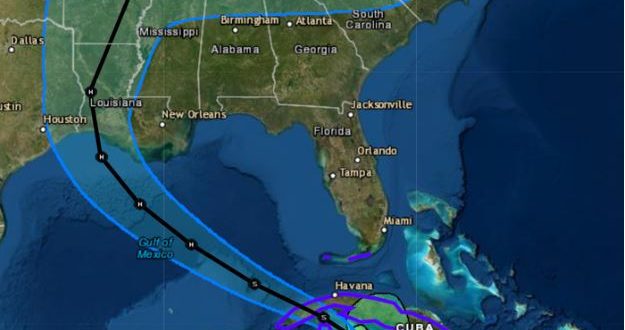 Laura Is Predicted To Be Category 2 Hurricane In Gulf; Marco Fizzles

Tropical Storm Laura is forecast to become a strong hurricane after it enters the Gulf of Mexico, but Tropical Storm Marco is weakening as it approaches Louisiana, easing coastal communities’ worst fears of a potential one-two punch by powerful hurricanes.

Two hurricanes occupying the Gulf of Mexico at the same time would have been a rare event. That won’t happen, but while Laura and Marco don’t currently have fearsome winds, they promise to bring a perilous amount of water to low-lying towns and communities along the Gulf Coast.

Marco’s maximum sustained winds have dropped to 40 mph. The storm is about 40 miles southeast of the Mississippi River’s mouth, the hurricane center said in its 2 p.m. ET update. It’s creeping north-northwest at 6 mph and is expected to skim Louisiana’s coast before dissipating.

Laura’s forecast path calls for the storm to make landfall as a hurricane near the Texas-Louisiana border late Wednesday or early Thursday. Early forecasts had called for landfall near the Florida Panhandle.

“We’re actually forecasting a Category 2 hurricane,” National Hurricane Center Director Ken Graham says, noting that Laura is expected to pick up power from the warm waters of the Gulf of Mexico.

The new forecast has Laura drenching some of the same parts of Louisiana that Marco will douse in the early part of this week.

Marco is far smaller than Laura, but its rain has already reached a large area of the Florida Panhandle and southern Alabama and Georgia, dropping 8 to 9 inches of rain far from its center. It’s the result, Graham says, of a strong wind shear that tilted Marco and “blew all that moisture and the convection off to the east.”

Laura is currently just south of Cuba, in the Caribbean Sea. “Gradual strengthening is expected, and Laura is forecast to become a hurricane by early Tuesday,” the National Hurricane Center says.

By late this week, “Laura is expected to produce rainfall of 4 to 8 inches, with isolated maximum amounts of 12 inches across portions of the west-central U.S. Gulf Coast near the Texas and Louisiana border” and inland areas, the hurricane center says.

Laura’s maximum sustained winds are expected to reach 105 mph within the next 72 hours. But it could strengthen even further, Graham says, if the storm takes a longer and more westward path to the coast than is currently predicted.

Laura’s worst impact in the U.S. will be seen from late Wednesday into Friday. Federal forecasters say its intense rainfall could spark “widespread flash and urban flooding” and possibly cause some streams and rivers to flood.

Laura has triggered tropical storm warnings in parts of the Cayman Islands and Cuba, as well as in the Florida Keys from Craig Key to Key West — and farther west, out to Dry Tortugas National Park.

Hurricane Marco weakened back into a tropical storm Sunday night, prompting forecasters to lift a hurricane watch for New Orleans and nearby areas. But the system is still bringing heavy rain to parts of the northern Gulf Coast on Monday, and it could saturate the ground in some of the same areas Laura will hit later this week.

The biggest threat from Marco is now due to its rainfall. The storm could produce “accumulations of 2 to 4 inches with isolated maximum amounts of 7 inches across portions of the northeast and north-central Gulf coast through Tuesday,” according to the hurricane center.

Forecasters discontinued all coastal watches or warnings on Monday as the storm weakened — a relief to residents of Louisiana and Mississippi who had earlier been warned of a potential storm surge of 2 to 4 feet.

Because one tropical storm will follow closely on the other’s heels, Louisiana Gov. John Bel Edwards says residents should prepare to ride out the tropical weather. Another complicating factor: Louisiana is already coping with a COVID-19 outbreak, reducing capacity for shelters and evacuation efforts.

“The first 72 hours is on you,” Edwards told residents on Sunday. “That is because the second storm comes in so close that there may not be much of a window when we can fly search-and-rescue helicopters, when we can get out with high-water vehicles and those sorts of things.”

Climate change has been linked to the more frequent occurrence of major hurricanes globally as well as the rising number of hurricanes in the Atlantic. In addition to strong winds, many of the most dangerous storms in recent years have brought tremendous amounts of rain – creating new threats to people and infrastructure farther inland.

Previous Microsoft backs Epic Games in fight over Apple’s App Store fees
Next What Does the Future Hold for Beauty Tech?