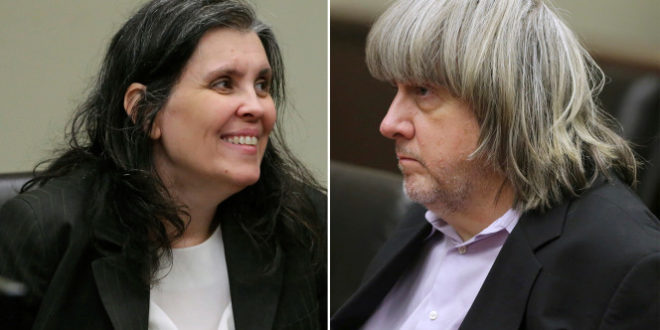 Accused California parents-from-hell David and Louise Turpin had their older children babysit their younger ones while they embarked on kinky sexcapades, Louise’s sister alleged Monday.

The couple’s sexual hijinks included Louise having seedy romps in a hotel with a stranger she met online — with the blessing of her husband — and then she and her hubby re-enacting the extramarital affair in the same room exactly a year later, the sister said.

Louise told her sister, Teresa Robinette, in a phone call around 2009 that “her and David had met a man online from Huntsville, Alabama, and that they were on their way there to meet him and that she was going to sleep with him and that David was okay with that,” Robinette told “Today.”

“All I know is that it did happen,” Robinette continued. “She met this man at a motel, slept with him, and what makes it even worse and even weirder is that exactly one year to the day of the anniversary that she did that, she called me and thought it was funny that David was taking her back to the exact same hotel room — the exact same bed that she slept with this man in — so that David could sleep with her in the same bed.”

Apparently weary of their button-down religious lifestyle, the Bible-thumping couple began to cut loose about a decade ago, “experimenting in different religions” and forcing their older children to “take care of the younger children so that her and David could kinda sow those wild oats that they didn’t sow when she was younger,” Robinette said.

David Allen Turpin and his wife, Louise Anna Turpin, kiss while celebrating a renewal of their wedding vows with Elvis impersonator Kent Ripley.

The Turpins were arrested for torture, child abuse and false imprisonment last week after their 17-year-old daughter escaped their suburban Perris, Calif., home and alerted authorities that she and her 12 siblings were starving and being held against their will.

Pervy David, who abducted Louise at 16 before getting her preacher dad’s blessing to marry the young girl, is also accused of performing at least one lewd act on a child under the age of 14, prosecutors have said, declining to give further details.