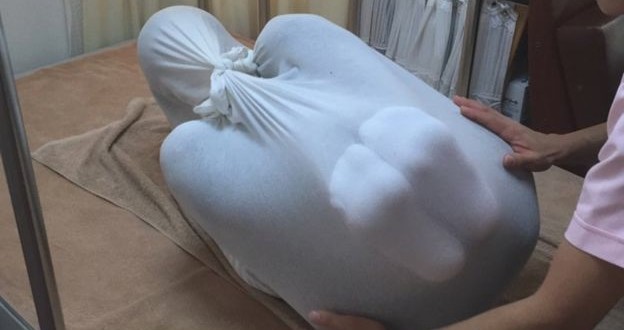 Why Japanese people are wrapping themselves up in cloth

Otonamaki, which directly translates to “adult wrapping”, is a Japanese therapeutic method meant to alleviate posture problems and stiffness and it is gaining traction around the country.

The idea for Otonamaki comes from the practice of Ohinamaki, which sees babies wrapped up in cloth in a similar fashion. This is meant to help with their physical development.

Each session lasts around 20 minutes.

“The reason why Otonamaki was invented was because some people were worried about babies struggling or feeling claustrophobic while being wrapped up,” says Orie Matsuo of Kyoko Proportion, one of several companies that offer Otonamaki to its customers.

“We thought if adults were rolled up like them, they could experience how good it feels.”

And if customer feedback is anything to go by, Otonamaki is certainly proving successful.

“It looks cramped but it doesn’t feel tight at all,” said a 40-year-old customer of Kyoko Proportion. “It’s the opposite of that. Afterwards I felt an improvement in my shoulders and back.”

“It felt so good I almost fell asleep. My neck and lower back were relaxed, ” said another customer. “I want my husband to learn [how to do] it.”

But not everyone is convinced.

“This looks so creepy,” said one user on Twitter. Another compared it to something out of a horror film.

The massage is offered mainly to women, some of whom come to see it as an alternative to massage or physical therapy. 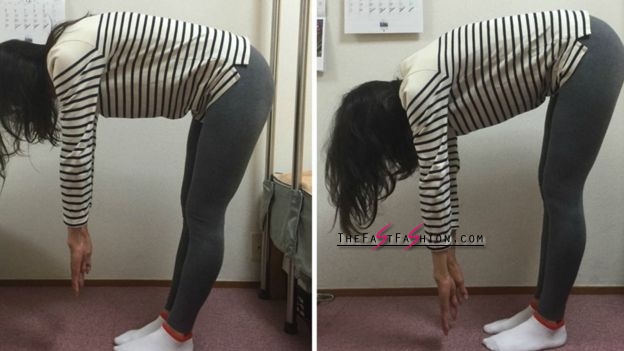 “By pushing your shoulders and legs together, your body gets straightened and removes the pain of your back, lower back and hip joint,” she tells the BBC. “Some of our clients come to treat their pelvis after childbirth, or others to fix bow legs.”

The company first introduced the practice in 2015, and so far, some 70 people have experienced Otonamaki with them.

But it might take a while for the practice to catch on, it’s certainly not mainstream yet.

“I’ve never heard of Otonamaki or tried it myself”, said Director of the Fukumoto Japanese Holistic Clinic, Shimpei Fukumoto. “I understand what they are trying to do but it’s not traditional physiotherapy.”

As an anti-stress technique many of those who have experienced it, testify to its effectiveness. However, it still feels some way from being part of established physical therapy procedure.

“I totally disagree with the treatment method,” said Mr Visvanathan Ravi, Senior Physiotherapist at Hallmark Physiotherapy. “They way they were wrapped up may lead to muscle strains if not in the short term, but the long term.

“If a person stays in the position for 30 minutes, I’m sure there will be spine problems. It’s not advisable to do this treatment.”

Previous Five Sexy, Seductive Things You Do That Make Men Want You BAD
Next Goldie Hawn, 71, Shows Off Her Shoulders at the Golden Globes