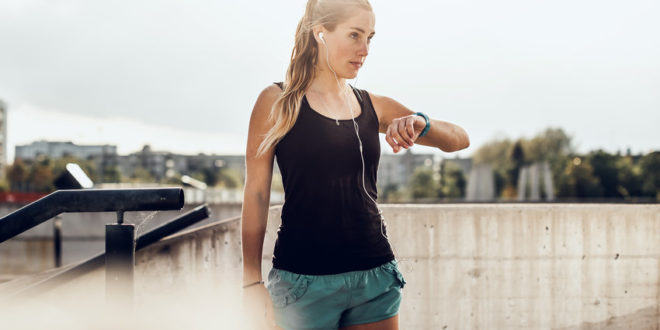 Female Athlete Checking Her Heart Rate on a Fitness Tracker

Good old-fashioned food and exercise logs may work better for many people, suggests a new study.

Adding a fitness tracker to your weight-loss routine might not help you shed pounds faster, researchers at the University of Pittsburgh are cautioning. In fact, they recently found that people who used wearable technology actually lost less weight than those who logged their exercise manually.

Their study, published this week in JAMA, concludes that such devices “may not offer an advantage over standard behavioral weight-loss approaches.” But the researchers also point out that the way people use fitness trackers is very individualized. Their findings suggest that using them to slim down won’t work for everyone, they say—not that it won’t work for anyone.

John Jakicic, PhD, a distinguished professor in the department of health and physical activity, designed this study to see what would happen when wearable activity trackers were given to people who were already involved in a weight-loss program. So he and his colleagues recruited 470 overweight men and women, ages 18 to 35, and gave them instructions about limiting their daily calories and getting more physical activity.

The participants met for weekly check-ins for half a year, during which they all lost weight. “We generally see really good effectiveness for the first six months on these types of programs, then things start to slip away,” says Jakicic. “We thought if we added an activity tracker to what we know is an already pretty good intervention, that would make it better—that it would boost the effectiveness.”

But they actually found the opposite: When they divided the participants into two groups, and asked them to either wear an activity tracker or record their physical activity manually on a website for the next year and a half, the latter group came out on top.

People in the fitness tracker group lost, on average, 7.7 pounds since the start of the study two years prior, while those in the self-tracking group lost an average of 13 pounds. “We were pretty shocked,” says Jakicic.

Another surprise? Those who wore fitness trackers didn’t even get more physical activity than those who didn’t. Both groups did see improvements—in body composition, fitness level, diet, and the amount of exercise they got each week—but there were no significant differences between the two.

But, Jakicic stresses, these results only focus on the overall picture. “That doesn’t mean that fitness trackers aren’t beneficial to some people,” he says. In fact, there were individuals in the study who lost lots of weight using a wearable tracker, just as there were people who didn’t lose much in the self-tracking group.

“There are a lot of people out there who live and die by these things,” he says. “They love it and it engages them and keeps them involved, and that’s really important. We’re not saying don’t use it if it’s working for you.”

If, however, you’ve been wearing a tracker and you’re not losing weight, this study may serve as a wake-up call of sorts. “We think it could be that people are paying so much attention to the tracker that they’re losing sight of all the other things that need to happen,” says Jakicic. “Maybe your tracker is telling you you’re doing well, so you take the liberty of eating another cookie or another cupcake.”

Another possibility, he says, is that people who play an active role in recording their fitness data—by keeping track and physically writing it down or typing it into a computer—may hold themselves more accountable than those who use trackers.

“When you use a program like the one we used in our study, you’re taking responsibility,” he says. “You say, ‘I exercised for 30 minutes today,’ and you’re engaged in that process; you’re not relying on a device or a machine to do it for you. So maybe you have to be engaged and hands-on at that level for it to really be effective.”

The fitness trackers used in the study were BodyMedia Core Fit armbands, which connect to a website where users can view their progress. The self-tracking group used a computer program set up specifically for the study, but Jakicic says it’s similar to commercially available apps and websites like MyFitnessPal.

The researchers are now analyzing their findings more closely, to look for patterns among those study participants who did seem to benefit, from a weight-loss standpoint, from wearing fitness trackers.

“We don’t know yet what makes these people different from anyone else,” say Jakicic. “If we can identify people with certain characteristics that will really be motivated by these devices—and other people who won’t—then we can hopefully make some really helpful recommendations.”

This article originally appeared on RealSimple.com.