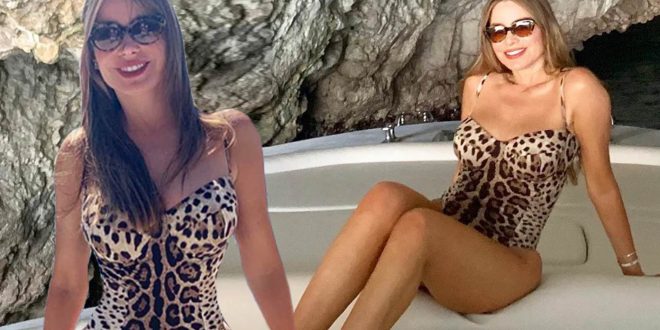 Sofia Vergara bares her behind in daring leopard-print swimsuit

Sofia Vergara is ready for summer fun in the sun.

The America’s Got Talent star, 49, took to Instagram on Saturday with a series of photos that showed her enjoying the warm weather in a high-cut, leopard-print Dolce & Gabbana bathing suit that was paired with oversized Foster Grant black sunglasses. One shot captured Vergara from the back, revealing her suit’s racy backless and thong-style cut.

Naturally, several of Vergara’s 25 million followers and friends were floored by the Colombian stunner’s post, which racked up more than 616,000 likes.

“ARE YOU KIDDING ME?!?!??” wrote Vergara’s former Modern Family co-star Sarah Hyland. Model Charlotte McKinney chimed in with “unreal,” along with a series of heart-eye emojis.

As Yahoo TV previously reported, the bombshell will be unrecognizable in her next project, Netflix’s limited series Griselda. The show is based on the life of notorious Colombian drug kingpin Griselda Blanco, who was known by nicknames including the Black Widow and the Cocaine Godmother due to her lucrative career in the drug trade. An early image released by the streaming service shows Vergara, who also executive produces the series, with dark curly hair and plucked eyebrows.