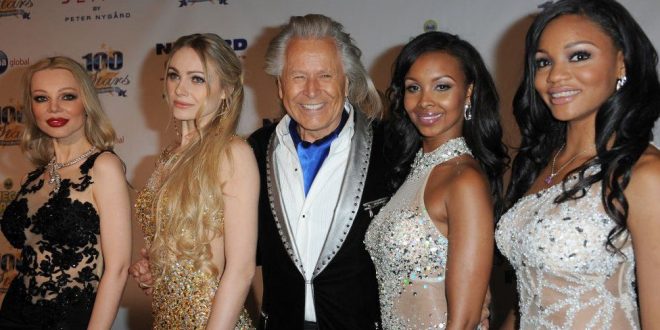 The 79-year-old Finnish-born mogul was indicted on nine counts of racketeering, sex trafficking and related charges involving a “decades-long pattern” across the globe of coercing women into sex acts, according to Manhattan federal prosecutors.

Some of his female victims claim they were forced to recruit other sexual partners for him — including girls as young as 14 years old — so he could have intercourse on a “near-daily basis,” according to court documents filed in Canada.

Nygard was nabbed in Winnipeg under the Extradition Act and appeared Tuesday afternoon in court, where he traded his usual flashy threads for a gray sweatshirt and prison pants, according to Candian outlet CTV News.

The former fashion exec is accused of using his international brand to recruit and pay for sex with his victims, who were put on his payroll as “models,” “assistants” or communication specialists, prosecutors said.

He allegedly referred to some of them as “girlfriends,” requiring them to travel and stay with him at his palatial properties in California, the Bahamas and Canada.

Prosecutors allege that Nygard would host so-called “Pamper Parties,” named for their free food, drinks and spa treatments, at his Marina del Rey, Calif., and Bahamas estates to recruit more girls and young women into his orbit.

Employees would allegedly take photos of the female guests and later show them to Nygard. If he approved of them, they went into a Rolodex of names that would be drawn from to attend future dinners, poker games and parties, prosecutors said.

He allegedly would use a “girlfriend” or employee at the parties to scout out a chosen victim  — who would then be forced into sexual activity and paid in cash, which could range from hundreds to thousands of dollars.

If they were unwilling, the chosen guests — who were sometimes minors — were drugged in order to get them to perform his sexual demands, prosecutors said.

Others were allegedly lured to a secluded area of the property where they were physically coerced or manipulated into participating.

Nygard also is accused of hosting sexual “swaps” with other friends and business associates, who would bring a “date” to trade for sex with one of his “girlfriends.”

“‘Girlfriends’ were not consulted in advance that they would be traded for sex and Nygard often pressured them to comply with swaps at his direction through manipulation, intimidation, degradation and threats,” prosecutors said.

He also brought them for the same purpose to “swingers’ clubs” in New York City, Miami, Los Angeles and Winnipeg — where he would pressure the women into having sex with other men so he could sleep with someone else there, prosecutors said.

Nygard kept his “girlfriends” under constant surveillance, insisting they needed his permission to leave the properties — a rule enforced by his company’s employees, prosecutors said.

He also allegedly used false promises of modeling opportunities, financial support and threats to coerce the women into sexual encounters.

His lawyer, Jay Prober, on Tuesday was denied a publication ban on the evidence presented in court — which he requested despite acknowledging it was “somewhat moot” due to the media attention surrounding his client.

“To say that it’s already received some publicity is an understatement,” Prober said, adding that it does not mean that it “should receive any more.”

The ban would have only applied to Canadian media, allowing international outlets to still run the information.

Federal authorities raided Nygard’s Manhattan headquarters earlier this year — less than two weeks after a lawsuit accused him of luring young women to his Bahamas estate with cash and modeling opportunities.

Fifty-seven women have joined the class-action suit — and several of them claim they were 14 or 15 years old when the mogul raped them.

In August, two of his sons sued him for hiring his girlfriend, a “known sex worker,” to rape them as teens — allegedly telling one of them he wanted the woman to “make a man” out of them.

The sons said they came forward to lend weight to Nygard’s accusers.

“It’s about backing up the other people who are being called liars,” the older son — who was not identified — said in an interview with CBC News.

Nygard has previously denied the allegations of the women and his sons.

His rep didn’t respond to request for comment Tuesday.

Nygard stepped from the fashion brand he founded earlier this year, saying he was prioritizing the welfare of his employees, business partners and vendors.

He founded Nygard International as a sportswear manufacturer in 1967 — and now it has more than 170 stores in North America, according to its site.