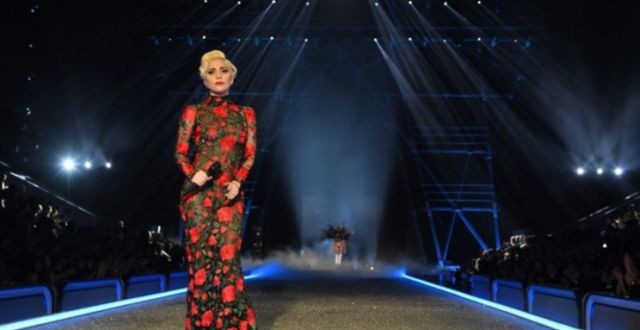 Lady Gaga managed to stand out from the crowd in the black lace, semi-sheer gown she wore on the pink carpet Wednesday in Paris at the 2016 Victoria’s Secret Fashion Show. She tied her hair back into a sleek low bun, not taking any attention away from the dress that emphasized her svelte figure. The gown hinted at nudity beneath but appeared to have a slip of skin-colored fabric that hugged every curve.

For her first performance, the singer channeled a look seemingly inspired by Andrew Lloyd Webber’s Evita, on the runway in a long-sleeve rose-patterned gown and platform black booties during a powerful performance of her hit single “Million Reasons.”

Performers in the past have opted for lingerie-inspired styles, so, of course, it wasn’t long before she ditched the ladylike gown for a more risqué second outfit — a skintight, sequined latex black jumpsuit by YSL, which she wore with dangerously high heels. Pure vintage Mother Monster.

Throughout her performance, she effected a fashion statement with one of her accessories — a large wide-brimmed black hat with glittery tassels attached.

At one point, Gaga took a cue from the models in the show and strutted down the runway in deconstructed white wings.

For one of her final ensembles of the night, Mother Monster wore a lace crop top with a matching floor-length skirt from Alaïa. In a video posted to Twitter, the singer can be seen walking the runway alongside fellow performers Bruno Mars and the Weeknd.

Gaga’s second and third looks more closely aligned with looks performers in years past have worn. At the 2014 Victoria’s Secret Fashion Show in London, Taylor Swift wore a racy pink slip with a lace jacket and strutted down the runway hand in hand with her close friend the model Karlie Kloss.

Last year, Selena Gomez stole the show in a black gown that featured a plunging neckline and a very high slit.

Considering models are walking down the runway in just lingerie, it’s not uncommon for performers in the show to opt for more revealing styles. Lady Gaga definitely delivered this year.