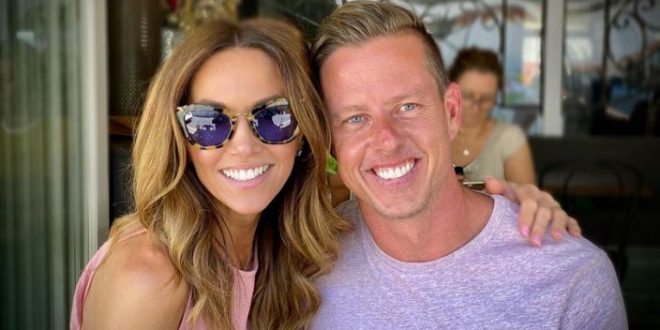 Kyly Clarke has showed off her incredible bikini body as she enjoyed a relaxing weekend away with her new boyfriend, V8 Supercars driver James Courtney.

The stunning 39-year-old looked stunning as she frolicked in the water at Pottsville Beach in Kingscliff NSW.

Kyly’s other half, James, seemed to be smitten with the fitness star, taking to his Instagram to upload the photo alongside the caption: “Yep…. that’s @kylyclarke walking on water. ”

Kyly responded, saying: “Did someone say the borders open”.

James’ post received a stream of comments from people saying ‘she is a stunner’ and ‘you are punching way above’, which the driver liked.

In October, Kyly appeared at Bathurst with V8 Supercars driver James Courtney, with the pair looking very much loved-up.

“It is early days but they are very happy,’ a source told The Daily Telegraph.

“Kyly loves motorsports; it is something she has been passionate about since childhood. They just clicked.’

Last month, the 39-year-old uploaded a stunning shot to Instagram, showing off her incredible six-pack in a bright yellow bikini while lounging on a Byron Bay beach.

Kyly simply captioned the snap “Wednesday”, as she posed in the flattering two-piece.

She previously spoken out about being an avid gym-goer, telling Sportsluxe in 2014 that she mixes up her routine to incorporate both cardio and weights.

“Keep up your water intake during the day. Make sure to eat breakfast to get that metabolism going,” she said.

In February, Kyly and Michael announced their separation in a statement to The Australian, writing: “After living apart for some time, we have made the difficult decision to ­separate as a couple, amicably.

“With the greatest of respect for each other, we’ve come to the ­mutual conclusion that this is the best course for us to take while committed to the co-parenting of our daughter.”