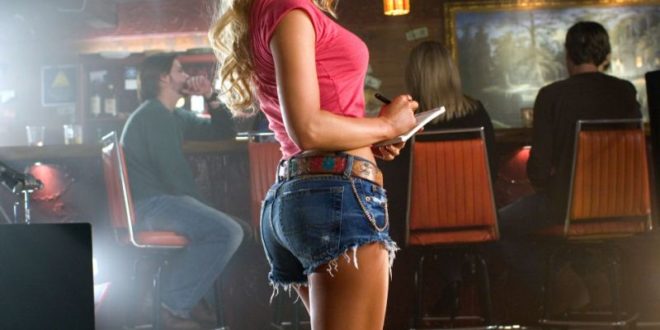 Few clothing items usher in summer quite like a perfectly worn-in, frayed, and ripped pair of denim shorts. Some call them jorts (aka jean shorts), while others might prefer “cutoffs.” They’re a 21st century festival staple and a street-style favorite, with price tags that span the gamut from a couple bucks for some vintage Levi’s dug up in a thrift store, to roughly  $1K for this Valentino pair, embroidered with butterflies.

But, before there were jorts, there were jeans. It’s nearly impossible to imagine a world or closet without denim, yet the durable, universally beloved garment only dates back to late 19th century, when Levi Strauss (along with a tailor, Jacob Davis) invented “waist overalls” in 1873, named for where the style starts on the body, compared to the full-body overalls of the past. 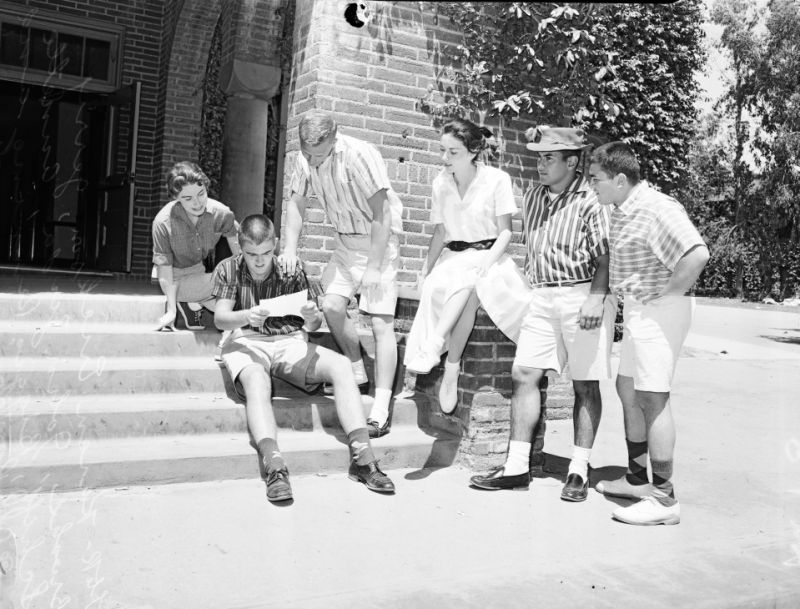 Shorts have been around since the early 20th century, remaining taboo through the 1930s, 1940s, and 1950s, for both men and women. There were even dress codes against, and fines for, wearing shorts, in certain cities throughout midcentury America.

Though it’s unclear when in the 20th century, exactly, the denim cutoff was born, denim itself was invented in the 1700s in Nîmes, France, and was initially touted as being completely tear-resistant. (The word “denim” actually refers to the birthplace of the sturdy fabric: it’s derived from serge de Nîmes in French, which translates as serge (a sturdy fabric) from Nîmes. 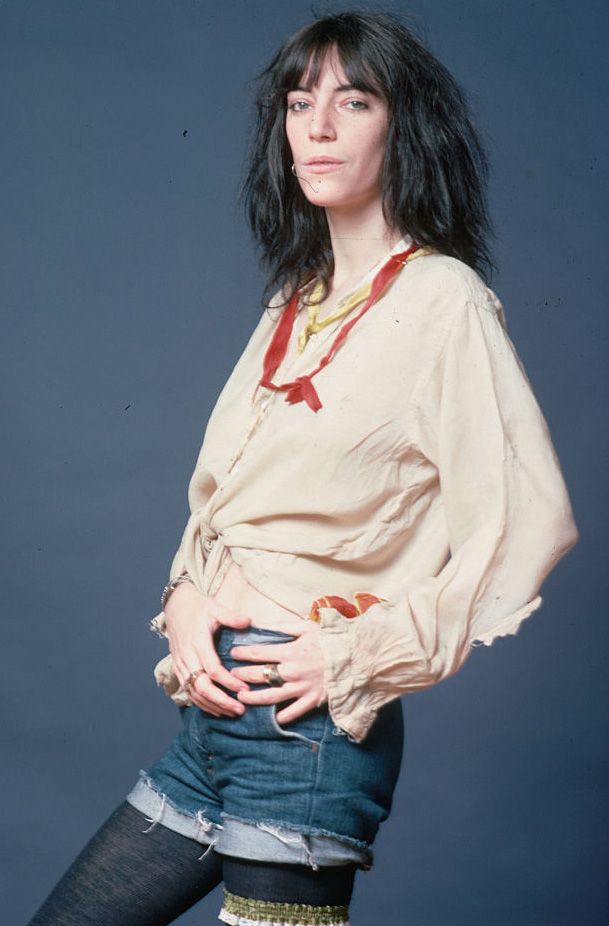 Long before jorts was a word — a dictionary-official one, even, but more on that later — the shorts style picked up popularity in the 1970s. The edgy twist on a beloved American staple was particularly big during the decade famous for punk and rock musicians. There’s a subtle but powerful symbolism in literally ripping apart a material that, while invented across the pond in France, had become strongly associated with American workmanship.

In the latter part of the decade, Patti Smith, a denim devotee in general, often donned pairs of roughly chopped and cuffed jean shorts, topped with oversized tweed mens’ blazers, loose T-shirts, or baggy button-downs. Smith often sported her cutoffs with black tights underneath, and wore them in a slew of situations, often photographed with her partner Robert Mapplethorpe, as well as onstage while performing. 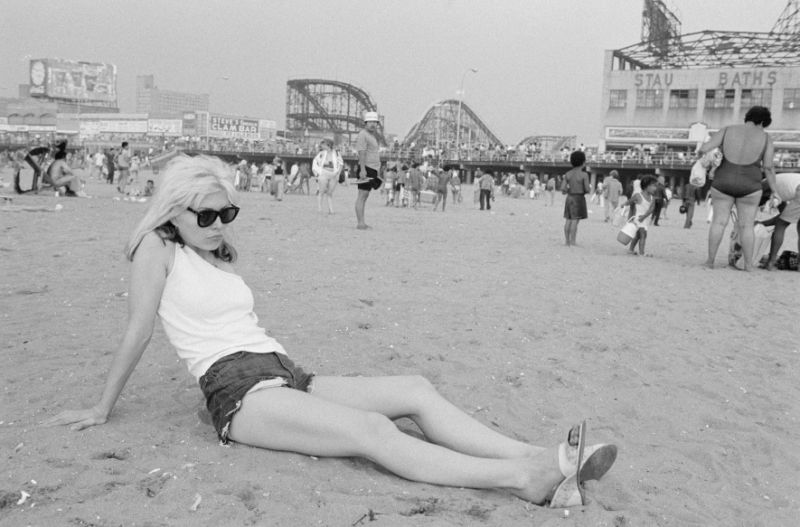 Another musical icon to memorably rock the rebellious style was Debbie Harry: The Blondie frontwoman donned a very short, very ripped pair of cutoffs while cavorting on the beach in Coney Island, Brooklyn, in a series of shots from 1977 by rock photographer Bob Gruen. 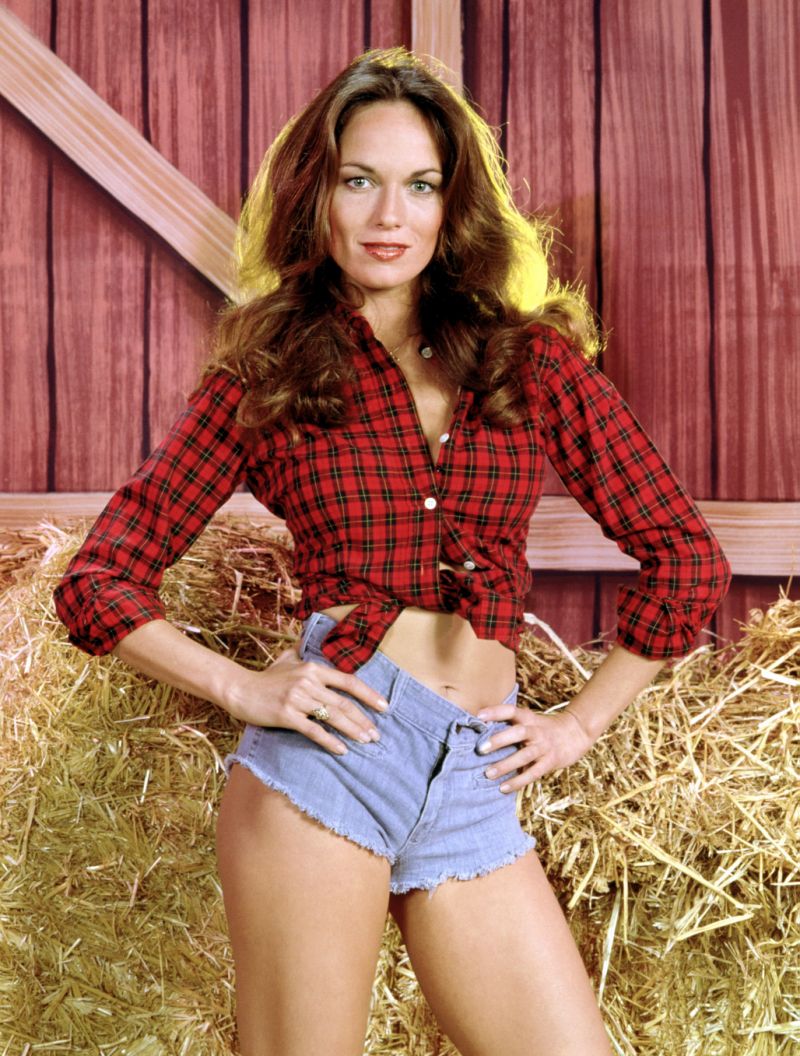 The garment was most powerfully immortalized by actress Catherine Bach in the TV series The Dukes of Hazzard, which aired from 1979 to 1985. Bach’s character, Daisy Duke, frequently flaunted her gams in extra-short cutoffs to help her get out of perilous situations that she and her two brothers found themselves in. The hot-weather answer to denim wearing become synonymous with a stereotypical, Southern flirtatious sex appeal, thanks to the show, and bequeathed them an enduring nickname: The shorts  are (still!) often called “Daisy Dukes.”

However, despite their breezy, bare-legged appearance, the cutoffs featured on The Dukes of Hazzard weren’t exactly styled in the most beach-friendly manner. The show’s network, CBS, deemed the minuscule shorts inappropriate for TV, and Bach had to wear flesh-hued tights under her cutoffs in every scene. 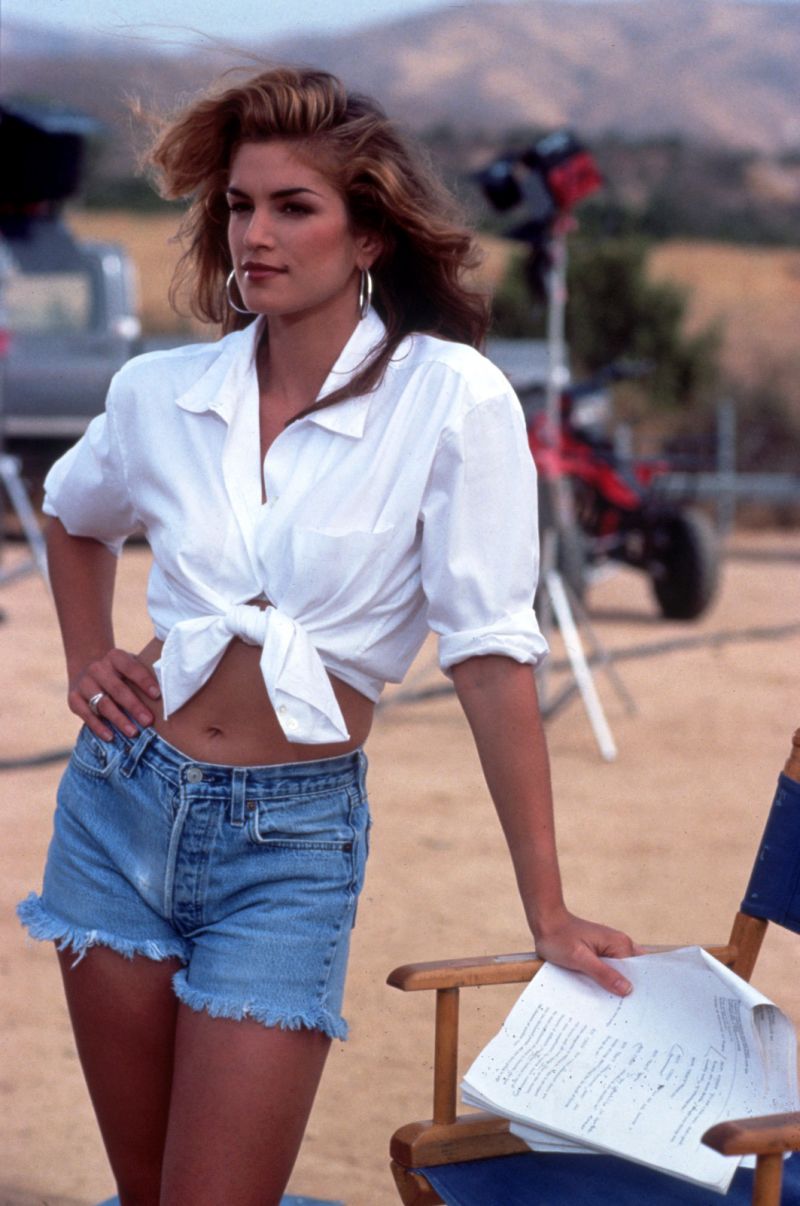 Behind the scenes on “Stunt Women”: Cindy Crawford in 1992 (Photo: Shutterstock)

Cutoffs got the Vogue treatment in the early 1990s. Supermodel Cindy Crawford wore a pair as part of a photoshoot on a Malibu beach in 1992, Herb Ritts shot Cindy Crawford for the November issue of Vogue, cavorting on the beach in Malibu with her husband at the time, Richard Gere, her supermodel physique displayed nicely in a pair of frayed Levi shorts. Before cutoffs made a Vogue cameo, their full-length predecessors were notably featured on the fashion bible’s cover four years before, when the magazine’s then newly minted editor-in-chief, Anna Wintour, featured a pair of blues on her very first cover, in 1988.

A big part of the charm of cutoffs is how democratizing and DIY-friendly they are; crafted for a couple bucks, or free, even, using any old pair of jeans and a sharp pair of scissors. The advent and popularity of the premium denim market in the late ‘90s and early aughts ushered in previously unheard-of triple-digit prices for the wardrobe workhouse, from brands like Frankie B, Seven for All Mankind, Paper Denim & Cloth, and True Religion. Shorts versions of pricy premium denim also took off, whether intentionally sold with abbreviated hemlines or in DIY form. 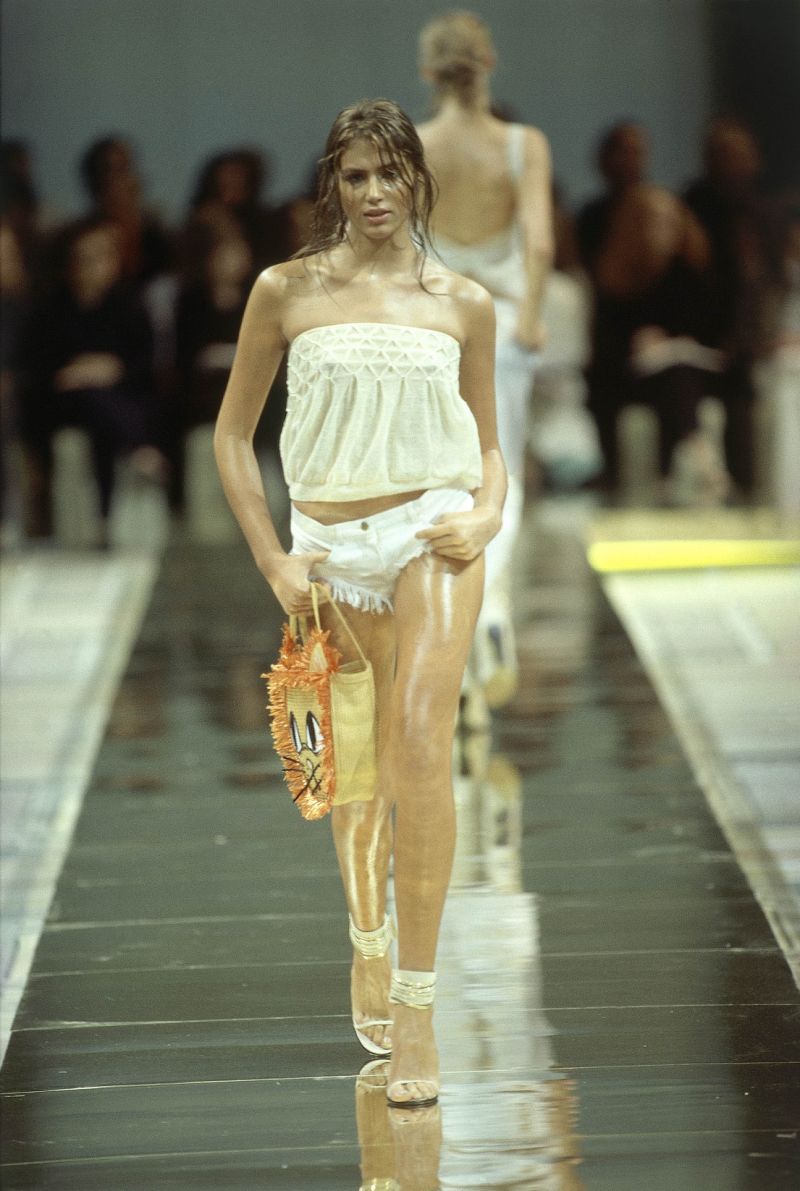 But the humble cutoff has also gotten more upscale runway treatments: In 1999, for one of Stella McCartney’s final collections as creative director of Chloé, she showed ultrashort white shorts with a low rise (as was the preferred, hipbone-exposing silhouette of the era) and extra-distressed hems.

Then, the shorts reconnected with their musician-vetted roots in a new way, thanks to their growing ubiquity with festival fashion. Specifically, with one increasingly popular festival: Coachella. The annual three-day blowout in the desert of Indio, Calif., which began in 1999, is where many a trend has hit critical mass in the 21st century, particularly in the past five to 10 years, be it jorts, flower crowns, or chokers. 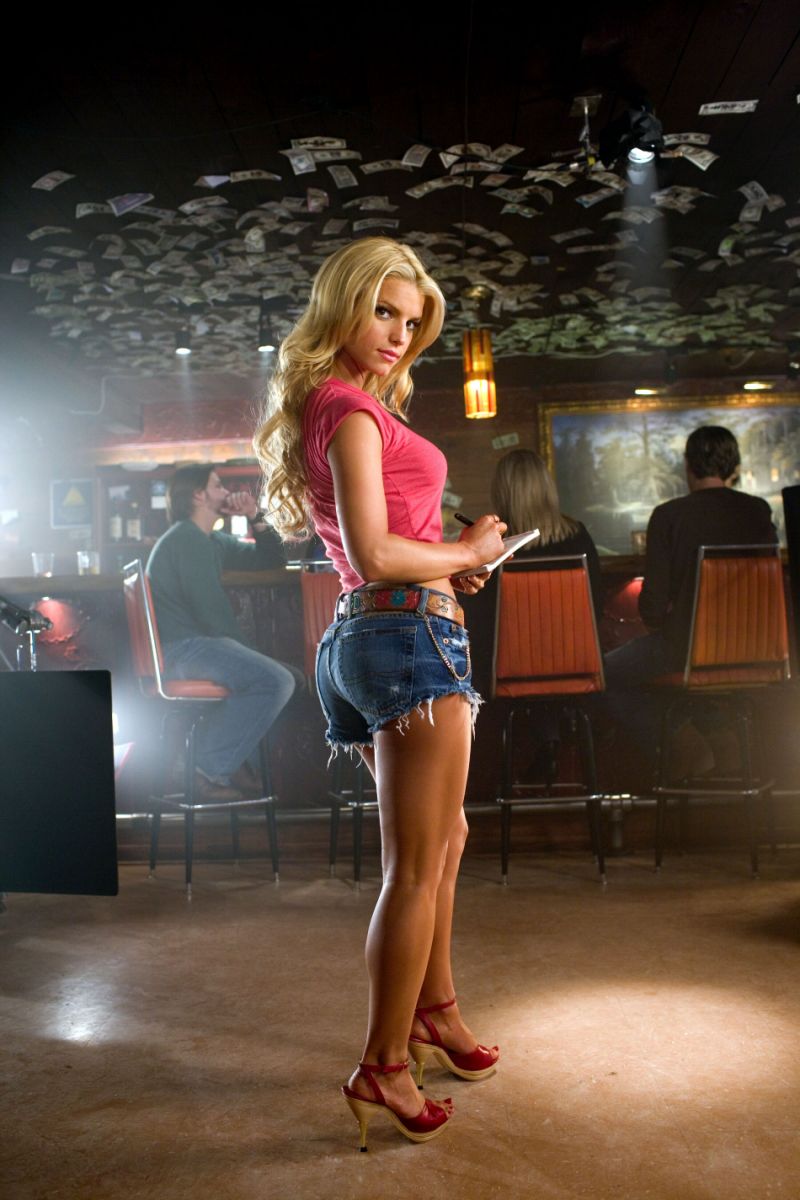 Jessica Simpson in the film version of “The Dukes of Hazzard.” (Photo: Everett Collection)

In 2005, Jessica Simpson introduced Daisy Duke (both the character and her signature shorts) to a younger generation with the film version of The Dukes of Hazzard. Unlike the O.G. Daisy Duke, Simpson didn’t wear tights under her cutoffs. Plus, the entire ensemble (both the shorts’ length and fit, and the snugness and cleavage-baring factor of her tops) were sexed up in the modernized, silver-screen take on the campy TV series. 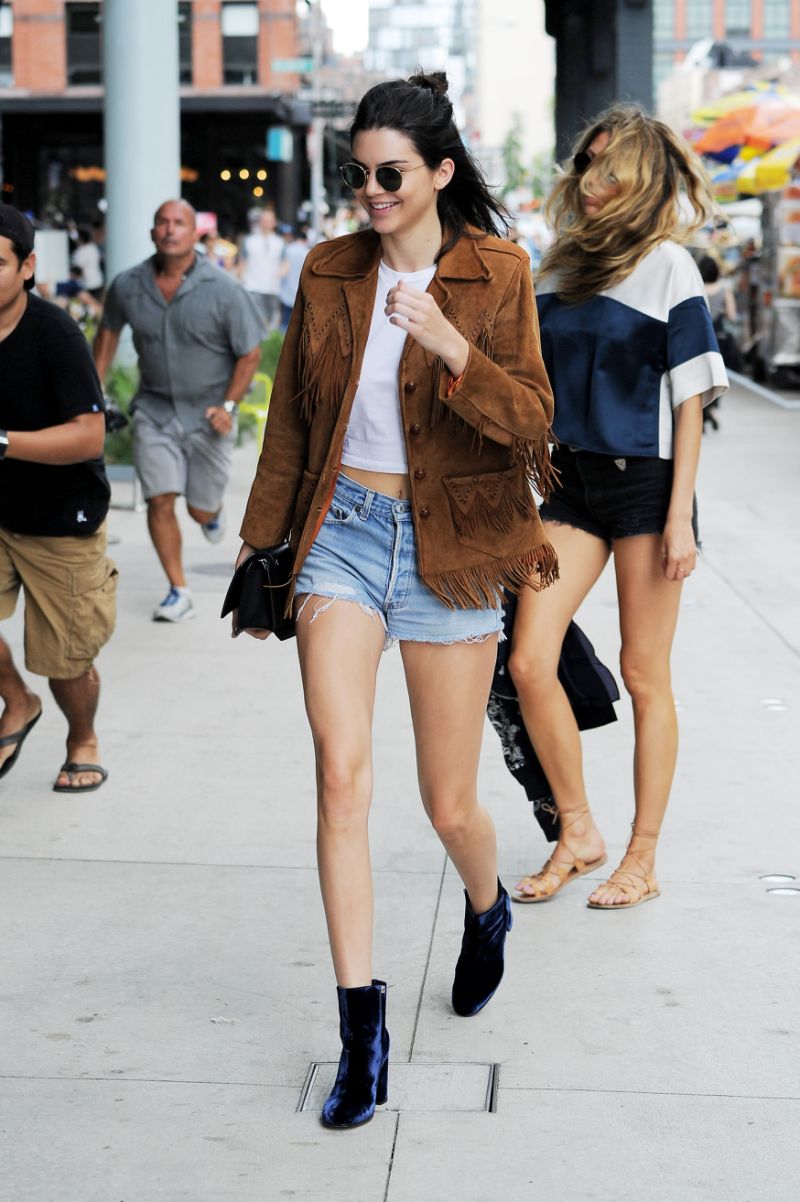 In 2015, the term “jorts” became a legitimate, official noun: the term, a portmanteau of “jeans” and “shorts,” was added to the Oxford dictionary that year, along with other modern vernacular, like selfie, twerk, and guac.

In the past decade, denim cutoffs have yet again cropped up on runways, in their fanciest, priciest form fathomable. During designer Hedi Slimane’s stint as creative director at Saint Laurent from 2012 to 2016, one of the (many) sweeping tweaks  he made to the venerable French fashion house was peppering his collections with supershort hemlines and punky vibes, sometimes translating to cutoff shorts 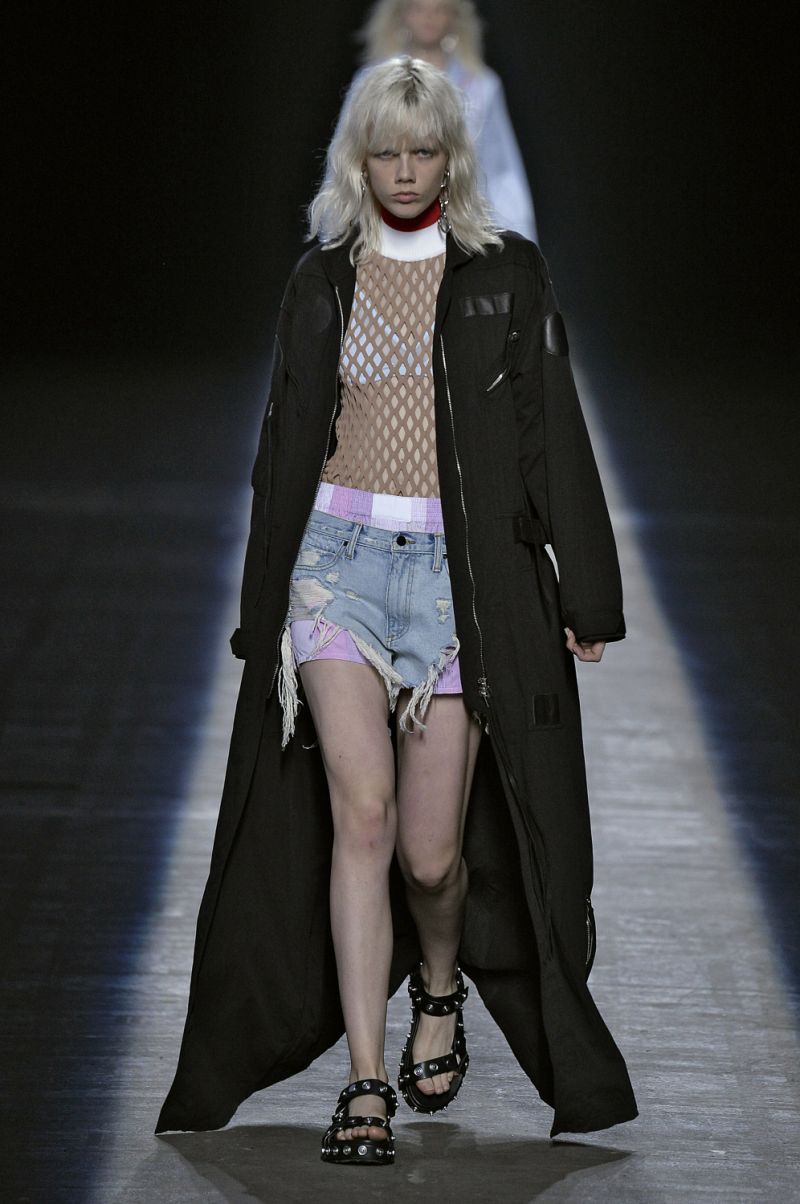 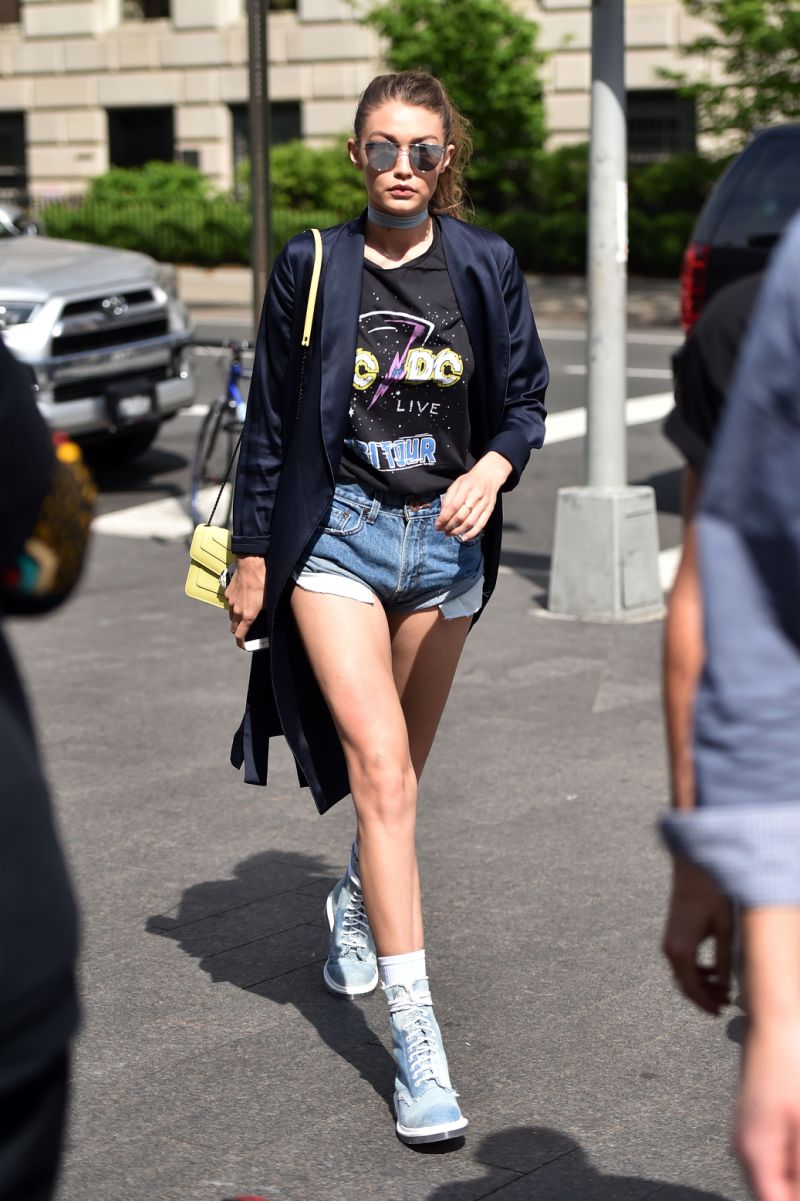 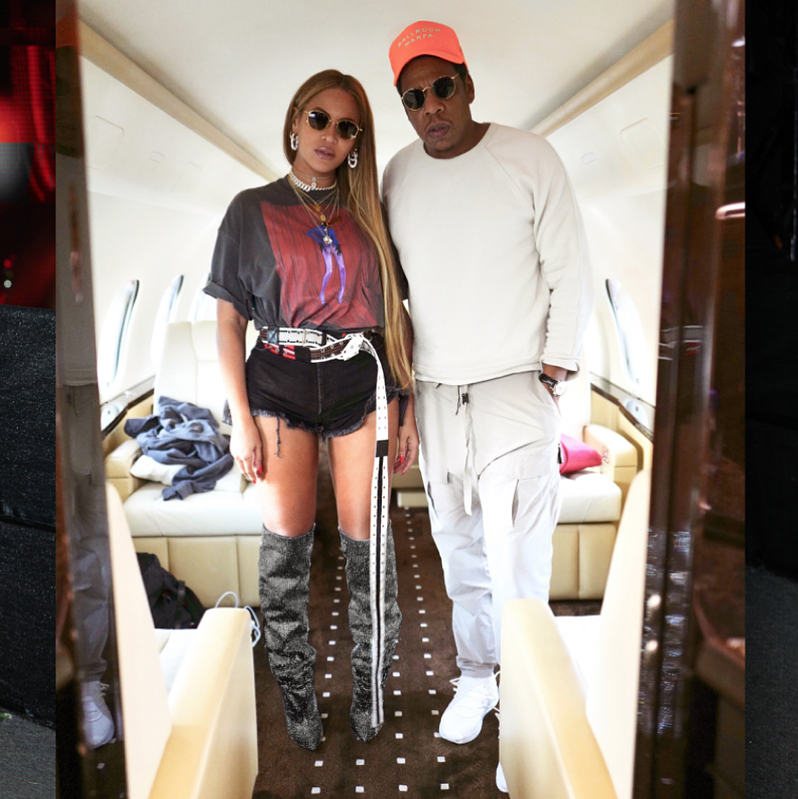 The most epic jorts moment in recent memory came courtesy of the one and only Beyoncé, at what’s become the most important modern natural habitat for the garment: Coachella. While headlining the festival in April 2018, Queen Bey slayed in her first of five outfit changes throughout her set: a heavily shredded, customized pair of Levi’s High-Rise shorts, paired with a bejeweled yellow satin hoodie, flesh-toned fishnets, and iridescent sequined boots. The superstar had another memorable cutoffs getup a couple months earlier, in December 2017, thanks to a pair of black cutoffs paired with glittery Saint Laurent knee-high boots. 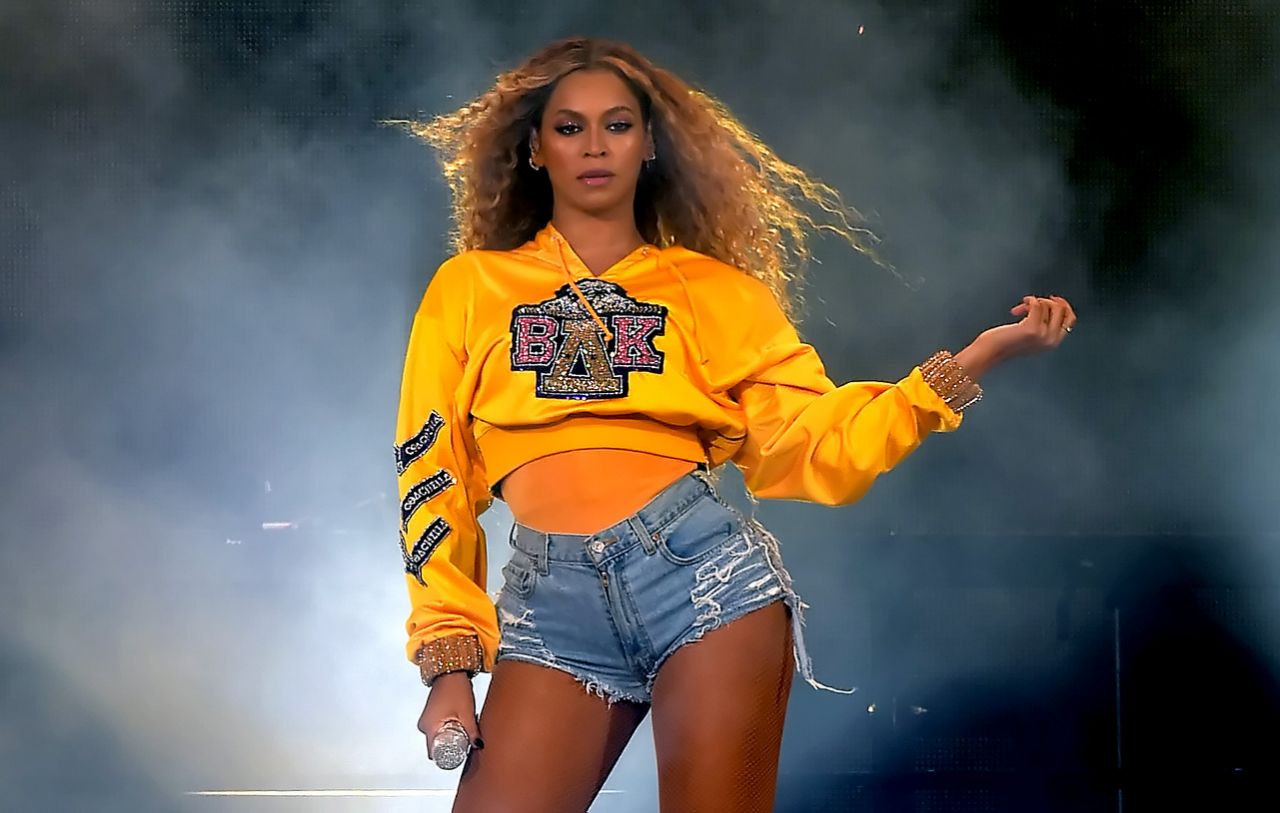 These days, denim cutoffs are less associated with their late 20th century connotations of Daisy Duke and punky DGAF rock legend style, and more with celebrity street style (and, of course, festival garb).

So, just like the enduring, universal appeal of jeans — despite changing silhouettes, rises, and inseam lengths that cycle in and out of trendiness over the years — denim cutoffs are the indispensable warm-weather counterpart. 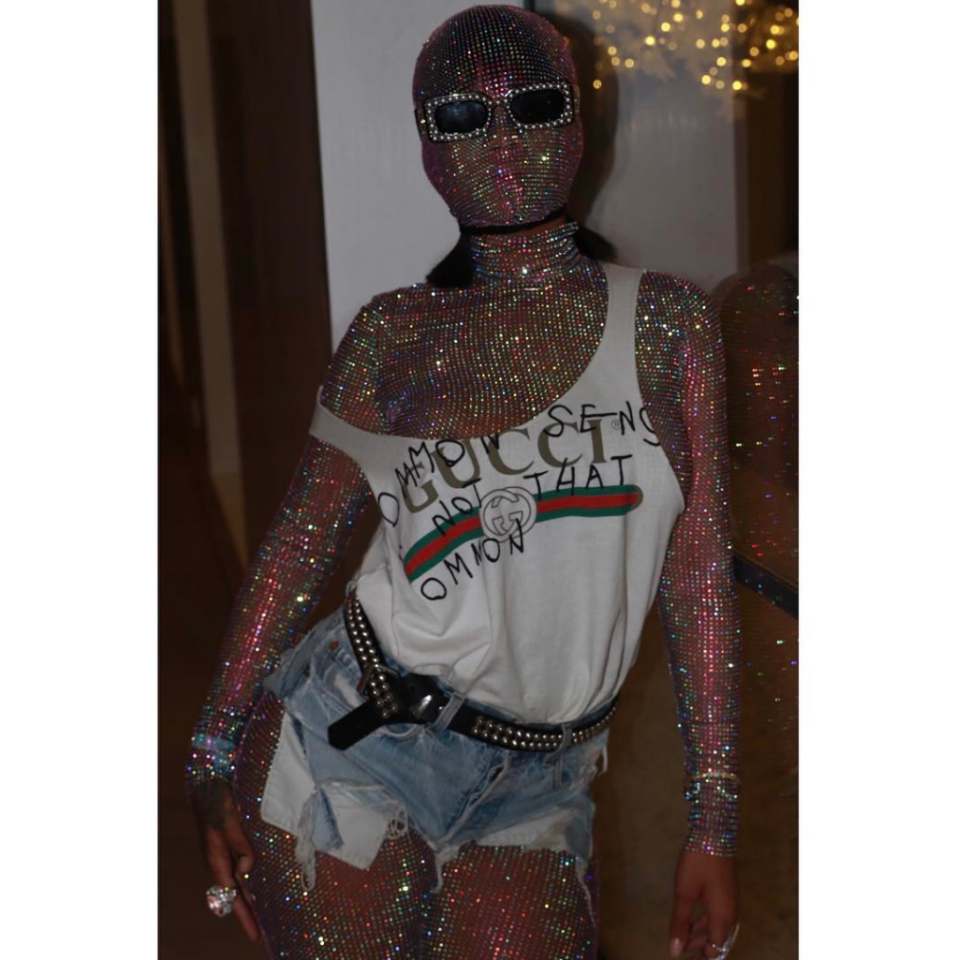 Rihanna wears a Gucci sparkle bodysuit and balaclava with her jorts at Coachella. (Photo: Instagram)

The appeal varies widely: For some, there’s a sort of Southern sexpot vibe, thanks to the surprisingly sartorially memorable television character, Daisy Duke, while others might associate with it a punk-rock insouciance, à la Patti Smith. Or, perhaps, a carefully curated but “carefree” quintessential Coachella look.

Expect this wardrobe staple to stick around for many more decades, sure to be championed by a new generation of style icons, across music genres and various creative fields, personal style preferences, and price points. In other words, love them or loathe them, in all likelihood, jorts are here to stay.

Previous When people wear colored contacts lenses, do the surroundings appear in that color or will it be normal?
Next Big, bright hair color won at the 2018 BET Awards