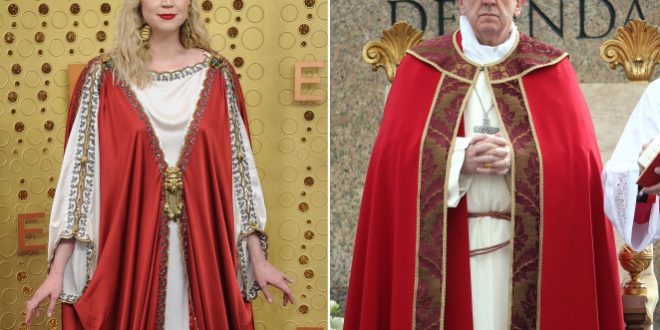 Who wore it better, Gwendoline Christie or Pope Francis?

The “Game of Thrones” star had fans freaking out over her 2019 Emmys gown, channeling her best holy haute couture.

The 40-year-old, who is nominated for outstanding supporting actress in a drama series, donned a white gown with a Roman-inspired cape and gold brooch. The look was from the Gucci Resort 2020 collection, but fans didn’t hesitate to point out the similarities to Jesus Christ.

Others couldn’t help but call the actress a god, especially since she nominated herself for an Emmy.

“The G in Gwendoline Christie stands for God,” one fan wrote.

“You’ve heard of god is a woman. now get ready for jesus is a woman,” wrote another.

“Gwendoline Christie had come to bless all of us with her grace, since she’s god,” another chimed in.

Some fans noted that her outfit bared a striking resemblance to Pope Francis.

Yet another fan couldn’t help but point out her look’s similarity to Julius Caesar, writing: “Gwendoline Christie better be careful tonight, I hear Brutus has a plan to stab her in the senate.”