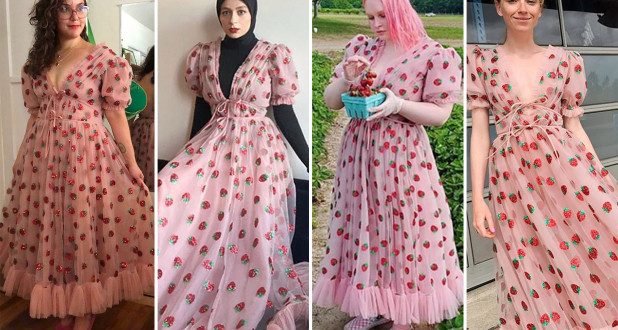 The girly ‘Strawberry Dress’ is the hottest look of summer 2020

When life gives you lemons, buy the #StrawberryDress.

The must-have fashion item of summer 2020 isn’t a tie-dye sweatsuit or house slippers to shuffle around your apartment while working from home.

It’s a gloriously impractical $490 strawberry-studded midi-dress done up in pink tulle, glitter and ruffles that’s ubiquitous on Gen-Z Instagram and TikTok feeds — and has earned its own hashtag with nearly 10,000 posts showing fashionistas wearing the look while prancing in fields or lounging on picnic blankets.

“I think people are seeing the dress as an escape from life right now,” Lirika Matoshi, the designer behind the playful piece, which also comes in plus sizes up to 18, told The Post.

The dress’ success is sweet revenge for the 24-year-old, whose application to the Fashion Institute of Technology was rejected in 2016.

“I taught myself,” said Matoshi, who lives part time in Tribeca but has been spending time in her native Kosovo, where her fashion line’s factory is located. She said she’s been working “24/7” to keep up with demand for the fruity frock, which increased in demand by 738% in the first 10 days of August compared to July. It takes three people about two days to drape Matoshi’s made-to-order gown on a mannequin. 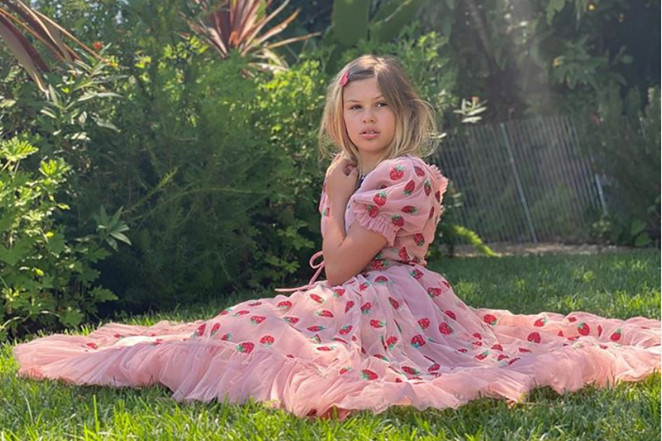 “My designs are inspired by my childhood,” she said, noting that she draws imagery from nature, whether it’s strawberries or clouds, which impart “a warm feeling of a better time.”

Nostalgia for better times was Hannah Ayoubi’s reason for buying the dress. 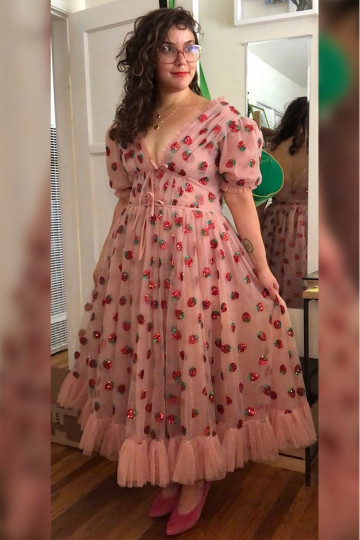 “Being locked up all day for months and wearing nothing but pajamas every day was really making me miss dressing up and wearing makeup,” Ayoubi, who works as a storyboard director for Warner Bros. in Los Angeles, told The Post. After watching a TikTok video of a happy customer trying on the punchy piece “a million times,” she decided to buy it.

“I really wanted that blast of serotonin from getting something new and pretty, and I told myself, ‘I haven’t been buying new clothes these last several months because of quarantine, so that justifies this purchase,’ ” she said. “And honestly, it’s worth every penny… the dress is magic.”

Katya Frakine, a 22-year-old who lives near Kings Highway in Brooklyn, decided to finally pull the trigger on the look after a year of having it bookmarked on her computer. “Even though there’s nowhere to go, I had set a goal to get the dress,” said Frakine, who ordered the frothy dress in July after landing a new job as an animator.

“I usually dress quite modestly, so wearing the dress makes me feel more confident and assertive,” says Frakine, who plans to pair it with brown leather sandals and a boater hat with a red ribbon and matching strawberry details. 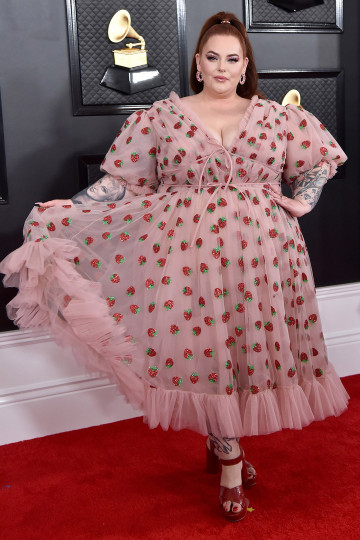 Even though model Tess Holliday wore the dress on the Grammys red carpet back in January, it’s the social media-driven teen obsession with the pretty rural aesthetic known as “cottagecore” that’s driving its popularity. It was also recently worn by Busy Philipps’ 12-year-old daughter, Birdie, on Philipps’ Instagram.

The dreamy design has spawned Sailor Moon-style fan illustrations, a video-game version to fit the cuddly characters in “Animal Crossing” and, to Matoshi’s dismay, plenty of cheap knockoffs including a $13.59 version from Amazon.

“You can’t really stop it,” said Matoshi, who’s been working with copyright lawyers to fight the faux frocks from proliferating.

And even though the dress looms large online, shoppers are showing off the fantastical look in the real world, too.

“I wore it the other day to Costco,” said Frakine. “I bought like 10 pounds of chicken while wearing the dress.”