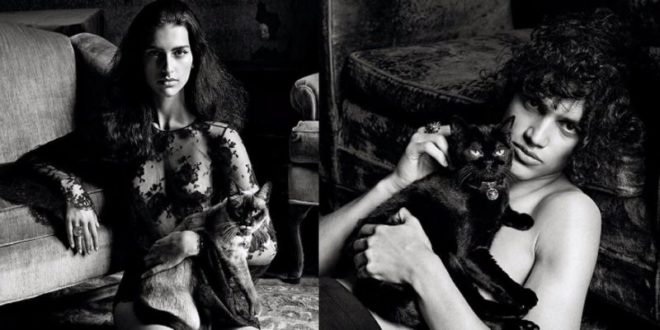 Back in March, Clare Waight Keller was announced as Riccardo Tisci’s successor at Givenchy – becoming the first female designer to ever hold the creative director title at the fashion house. Now, just months ahead of her runway debut for the brand, a first look at the new Givenchy is here.

While the former Chloé designer may be known for her romantic and feminine pieces, her first Givenchy ads feature Vadher in a sheer black lace top, sans bottoms, and a shirtless Bouremah in black trousers. Also not to be missed are the black cats wearing Givenchy collars.

Under the reins of Tisci, Givenchy was known for its close ties with the Kardashian-Wests, Jenners, Rihanna and squads of supermodels. If the new campaign is any indication, however, Waight Keller may be taking the house in a different direction – away from its celeb status and closer to its original roots under Hubert de Givenchy.