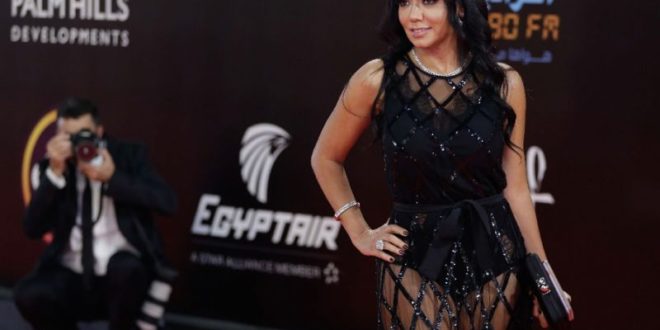 An Egyptian actress could face five years in prison for showing skin at a film festival.

Rania Youssef attended the closing event for the 40th Cairo International Film festival Nov. 29 in a glamorous black ensemble. The outfit consisted of a black leotard with a sheer black overlay. While the top layer was floor length and had beading, it was mostly see-through, revealing her legs. It did have a high neck, but the leotard dipped a bit lower, so part of her collarbone was visible through the overlay. It was also sleeveless.

While the gown hit a fashion high-note, it didn’t go over well in Egypt. Multiple lawyers filed a lawsuit against the 44-year-old accusing the actress of “inciting debauchery.” If convicted, she could face up to five years in jail, according to AFP. According to The Telegraph, lawyers accused her of committing an obscene act in public, “inciting debauchery and temptation,” and “spreading vice in ways that violate established norms in Egyptian society.”

Two of the lawyers “alleging obscenity” are Amro Abdelsalam and Samir Sabri. Apparently, Youssef’s appearance “did not meet societal values, traditions and morals and therefore undermined the reputation of the festival and the reputation of Egyptian women in particular,” Sabri told AFP.

The Egyptian Actors’ Syndicate commented on the dress without naming Youssef. “The appearance of some of the festival’s guests did not agree with the traditions and values of the society, and this has undermined the festival and the union which is responsible for its members behavior,” it said in a statement to AFP.

Egypt is a mostly conservative country with a Muslim majority. The Muslim religion requires women to cover much of their body for the sake of dignity, modesty, and “bodily integrity.”

While many of Youssef’s fans believe she should be able to wear what she wants, she understands where this criticism is coming from. On Saturday, she apologized on social media to the “many angered” by her appearance. “I probably miscalculated when I chose to wear this dress,” she wrote. “It was the first time that I wore it and I did not realize it would spark so much anger,” the actress added. “I reaffirm my commitment to the values upon which we were raised in Egyptian society.”

Rania Youssef is known for her work on many Egyptian TV shows, and according to The Telegraph, she just finished filming a movie in which she plays a famous artist who is sent to prison.

Previous Couple has to prove New Mexico is a state when applying for marriage license
Next Candice Swanepoel: 10 Hottest Bikini Photos On The Internet