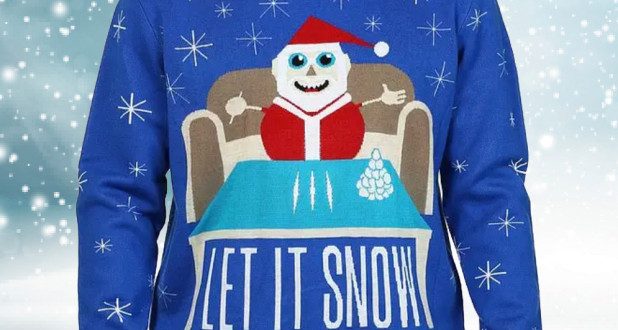 Cocaine Santa sweater is now a best-seller on Amazon

Walmart may have pulled the Cocaine Santa sweater, but on Amazon, the controversial cardigan has been labeled a bestseller.

The now infamous “Let It Snow” pullover, which depicts a hopped up Santa Claus with lines of white powder resembling cocaine on a table, is sold by a third-party seller on Amazon for $31.99, but the retailer lists it as a “#1 Best Seller in Women’s Novelty Sweatshirts.”

Best of all, the Amazon listing for the sweater, sold as “Cocaine Santa let it snow christmas sweater Sweatshirt,” is described as “Perfect for cozy days with your family!” in the description on the site.

As Business Insider points out, Amazon is not the official seller for the Cocaine Santa sweater, but the item “ships from and [is] sold by Amazon.com.”

The Cocaine Santa sweater even has a five-star rating from very satisfied Amazon customers.

“It’s the funniest, most amazing xmas sweater in the universe. Buy one,” wrote a customer named Matt.

Another customer named Larry loved the purchase at first for “a formal Christmas party,” but a fellow attendee was less than enthusiastic.

“As formal Xmas bashes are often somewhat stolid affairs, I figured this one would lighten the mood nicely and make for a yuletide conversation piece,” he wrote. “One gentleman, who is a recovering addict (much respect!) proceeded to give me a 30 minute lecture on the evils of drugs. He described, in agonizing detail, his many unfortunate experiences with the substance, each story ending worse than the last.”

He continued: “At the end of his rant, he had been reduced to a quaking, reddish pile of inconsolable goo, prompting me to make haste toward the exit, thus ending my attendance at the soiree prematurely.”

There are also plenty of other cocaine-themed Christmas sweaters for sale on Amazon, with hundreds of results for “cocaine santa” ranging in price and design.

Walmart came under fire earlier this week for selling the sweater on its Canadian website. It has since removed the item and issued an apology.

“These sweaters, sold by a third-party seller on Walmart.ca, do not represent Walmart’s values and have no place on our website,” a spokesperson told Global News Canada. “We have removed these products from our marketplace. We apologize for any unintended offense this may have caused.”