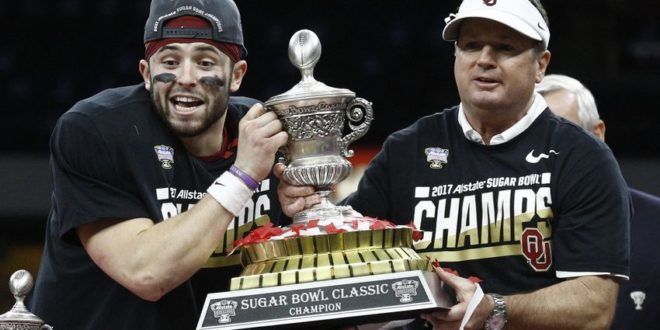 What Bob Stoops, Sooners said about Auburn after the Sugar Bowl

Maybe the SEC is better off not running into Bob Stoops and the Oklahoma Sooners these days.

The Auburn football team was the latest victim — falling 35-19 in the Sugar Bowl — to the Big 12 champion.

Stoops and some of his players discussed the keys to beating Auburn on Monday night. Here’s what they said:

Stoops on adjusting to Auburn’s defense after early possessions: “Really just execution. Same thing defensively. The execution early. I think the pace of the play and the different formations they gave us, just got us — even though we prepared for them, we were not ready to respond quick enough. And then we settled down and did. The same thing offensively. Once we settled down and recognized what they were doing, we handled it really well.”

Baker Mayfield on Auburn having less pressure as the game wore on: “It is how the game goes. As the game goes on as well as the run game, it wasn’t what we wanted in the first half. But our backs pound people, and so it wears on people. And you have to worry about stopping the run, that’s when we were able to drop back with some play action and get the ball downfield and vice versa. It opens up the run game and the run game opening up the pass game.”

Jordan Evans on OU going 4-0 vs. the SEC in the last four years: “Football is football at the end of the day. I don’t think anybody cares what conference you’re in. As long as you guys line up and play the way you’re supposed to play, the better team is always going to win. Tonight, I feel like it was us, and that’s why we came out on top.”

Evans on keeping Auburn out of the end zone between the first and last drives: “Like Coach mentioned earlier, it was just some technique stuff and execution stuff that we had to fix on our side of the ball. Once we started doing that and lining up right, we started shutting down their running game and putting them in situations and keeping them out of the end zone.”