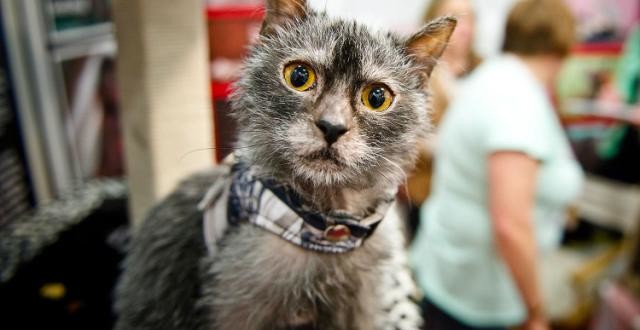 Time to get spooky and sweet.

Lyoki cats, an emerging kind of cat for the past several years, are the belle of the ball at this year’s LondonCats show, an event created to show off rare cat breeds, according to The Telegraph.

Lyoki felines, like LondonCats’s nine-month-old Shalnavazz Mehari, certainly have a unique look. Colloquially known as Werewolf Cats, these kitties have a genetic mutation which affects the hair follicles, making it harder for them to produce hair. The result is a cat who has a bare pink belly and paws, with coarser, sporadic hairs on the face and down the back. Basically, they look just like little werewolves.

Lyoki cats are not yet recognized as a breed, but the interest in the oddly adorable semi-furry felines shows there is certainly potential for this kind of kitty to take off.

“They have a lovely personality – playful, affectionate, intelligent, friendly and well-socialized. It is down to the breeder and the parents but my two are lovely,” Pervez Alexander, an owner of two Lyoki cats, told the The Telegraph.

But if you want to bring one of these up-and-comers into your home, it’s going to cost you. Breeders are currently charging over $1,500 for one of these kittens.

Meanwhile, shelter cats, which could turn out to be Lyokis, usually cost under $100 to take home.