Breaking News
Home / Entertainment / The Walking Dead 101: How Do You Kill a Walker? 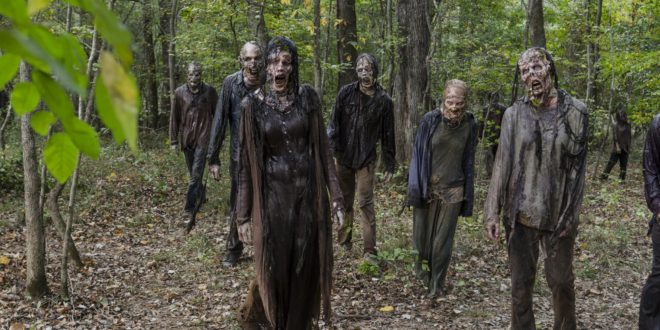 The Walking Dead 101: How Do You Kill a Walker?

With a name like The Walking Dead, it’s not surprising that the series regularly features gruesome character deaths. Though some of the most memorable ones are those of beloved survivors, far more walkers meet grisly fates on screen. But how exactly does one kill a walker, anyway? It’s a simple question, but those catching up on the series may we wondering. We’ve seen survivors get walkers off their backs in a number of different ways, from straightforward to ultra flashy (Rick and Michonne slicing through a hoard with a wire affixed to two speeding cars, anyone?), but there’s one surefire way to make sure a walker stays dead: destroy its brain.

Remember when Rick and his group end up at the CDC way back in season one? Dr. Edwin Jenner shows them research he’s collected in the hopes of finding a zombie virus cure. His findings illustrate how walkers come to be — when a carrier dies, the infection targets the brain, causing parts of it to reactivate and the body to reanimate with limited abilities. It makes sense, then, that the brain must be destroyed in order completely end a walker’s “life.”

Executive producer Greg Nicotero voiced similar thoughts in a 2010 interview. Citing iconic zombie movie director George Romero as a huge influence, Nicotero said that when creating the show, there were no serious considerations to change the “tried-and-true mythology” of a headshot acting as a sole killing method. He mentions that beheading is also a possibility, but we’ve seen several instances in which severed heads still reanimate — like in the Governers’ creepy aquarium-esque trophy case of victims.

Whether the blow is inflicted with a bullet, a knife, a crossbow bolt, or some other creative weapon, it seems the only reliable walker-killing method is to go right for the brain. So while viewers speculate on what’s to come in season eight, everyone can surely agree that as long as walkers are still roaming around, their intense death scenes will just keep on coming.