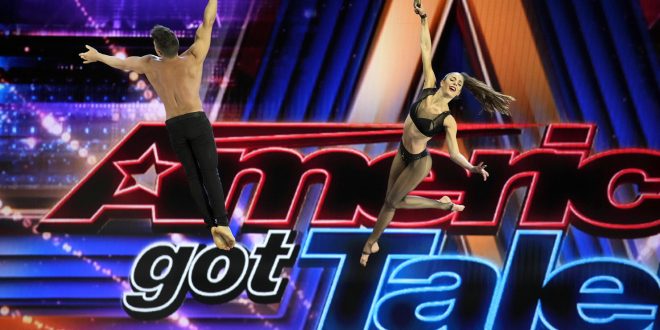 Duo Rings, who were born in Buenos Aires, said they came to AGT because their dream is to perform their act in Vegas. The husband and wife duo, who have been together for nine years, and married for three-and-a-half, shared, “We are gymnasts, so we created an act together, combining our passion in sports and entertainment, and showing our love.”

As Haley Reinhart’s rendition of Postmodern Jukebox’s “Creep” began to play, Cowell immediately stated, “Great song,” but that was only the start of what became a very impressive act.

Both Klum and Vergara were fascinated by the fact that Flora did a lot of the heavy lifting that; following their performance, Vergara said, “It was so interesting to see that she was doing the heavy work.” Flora responded, “Well, because women are strong enough to also do the big stuff, you know?”

“It was mesmerizing. It was so elegant. No safety net, nothing. It was incredible,” remarked Klum, while Cowell asked, “Who taught you to do this?” The couple said they created everything together from scratch, including the costumes, choreography and elements.

“This felt very different from this kind of act I’ve seen before,” said Cowell, “So the fact that you created this yourself really, to me, makes it more special.”