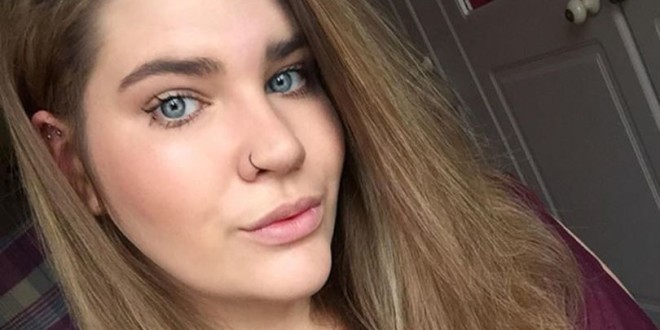 Shopper Lucy Horsely’s picture showed the shocking difference even though they are both high waisted, super skinny and super stretchy with exact same fastening

Here’s the picture that lays out high street retailers’ questionable attitude to jean sizes bare for all to see.

She posted a picture on Facebook showing two pairs of jeans, one size 18 from River Island and one size 14 from New Look.

However the 18-year-old questioned how the size 18 jeans were actually smaller than the size 14.

In the post, that has since been shared more than 17,000 times, she wrote: “So the black jeans are a size 14 from New Look and the blue ones are a size 18 from River Island.

“How on earth can the bigger size be smaller?! No wonder so many girls have confidence issues and hate buying new clothes, why can’t the sizing be the same in every shop?”

After comments from Facebook users that the jeans may be different styles, she added: “As this seems to be causing arguments, both of these jeans are high waisted, super skinny and super stretchy with the exact same fastening.

Lucy, of Driffield, took to Facebook after she found she could not fit into her normal size 14 in a variety of shops including H&M, Top Shop and Peacocks.

She said: “I accidentally ripped my jeans one day and my mum repaired them.

“They kept on splitting due to wearing them so much and after my mum refused to repair them anymore, I went out to buy some new ones.

“I tried a size 14 on in them all and I couldn’t get any of them past my bum cheeks.

“So I got the bigger sizes but still none were comfy enough.

“I thought I’d take a look in River Island and found some stretchy ones in a 14 but again couldn’t get them past my bum cheeks.

“I found it odd though how all my other trousers, jeans, leggings etc are a size 14 yet these were an 18.

“So when I got home I measured them against my size 14 jeans and they were actually smaller!

The teenager, who works on a dressage yard and in her local pub, said she felt “rather depressed” that she had to buy a size 18, but soon became “shocked” after comparing them with her other jeans.

She said: “I realised it wasn’t me and it was the clothing itself. I was so shocked by the difference, it’s disgraceful.

“From being a girl who has always fluctuated with weight, it really hurt me. I felt embarrassed buying size 18 jeans.

“I know people say it doesn’t matter what it says on the label, but to a lot of women it does and I feel I can speak on behalf of the majority of women, that sizing does matter and has a huge influence on your confidence and self-esteem.”

She added that she felt “fat and ugly” after having to buy a bigger size than what she was.

And it seems a lot of other girls have come across the same issue.

She said “The reaction has been incredible. In 24 hours I had over 10,000 likes and 10,000 shares with various messages on my private inbox, over 300 friend requests and some amazing comments.

“Knowing that my simple post showing the size difference has made it this far out on social media is a very satisfying.

“Feeling and knowing it may have helped other women see themselves differently is an amazing feeling.”

Lucy said she has messaged both New Look and River Island regarding the sizing and claims she was told by both that she could return the item if it did not fit.

No, thanks.
Previous This Man Slays Walking in Heels Like No Other
Next Ivanka Trump’s Brand Responds to Nordstrom