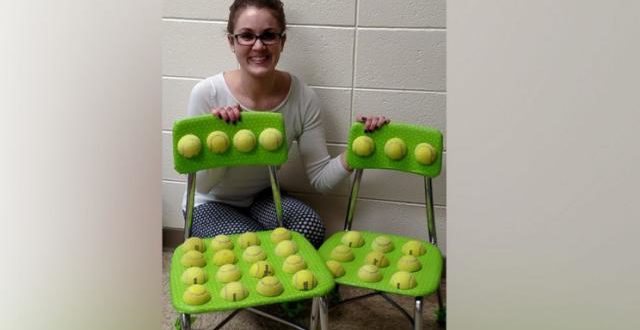 One Round Lake, Illinois, teacher got creative in order to help her students with autism.

According to the school’s Facebook post, which went viral, the chairs provide “an alternative texture to improve sensory regulation.”

Maplethorpe told ABC News that the chairs will service approximately 15 to 20 students.

Items, such as vests, blankets and Maplethorpe’s chair, often soothe a student, according to Autism Speaks, which has a list of similar items on its website.

Maplethorpe was inspired to create the chair after seeing a similar item on Pinterest “and [I] adapted the idea,” she said.

“I wanted to continue to address the various sensory needs present at Ellis and provide an alternative seating option for the students,” she continued. “I was excited that this chair could be beneficial for my students.”

The two chairs are currently in the school’s sensory room, which was created recently, according to Principal Beth Kiewicz.

“When a child’s sensory needs are met that allows us to move on to their academic needs,” Kiewicz, who has led the school for six years, told ABC News. “You have to look at the whole child — socially, emotionally and academically. That’s why we’re here.”

Maplethorpe said the chairs have already made a difference for some of her students.

“Students have become more patient, have followed directions, and restlessness has decreased while waiting for activities,” she said.

Previous Nina Agdal Wears Nothing But Shaving Cream In New Video
Next Selena Gomez : ‘I went away for 90 days’ due to depression