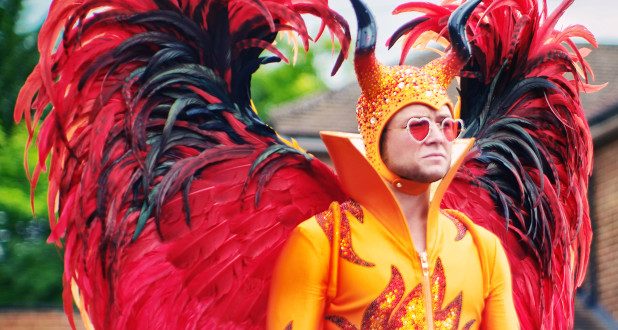 As Taron Egerton embarked on the timeless flight of musical fantasy that is “Rocketman,” Elton John encouraged the actor playing him to find his own voice.

“He told me very early on that he didn’t want me to try and sound like him,” says Egerton of John, who served as an executive producer of the film based on his life, out Friday. “He wanted me to make the songs my own. He wanted me to be creative with them rather than just copying him.”

With shades of “Moulin Rouge!,” the film is less of a conventional music biopic than “Bohemian Rhapsody.” “Rocketman” allowed for even more artistic license. “It’s Elton’s story, but it’s also a kind of reimagining,” Egerton, 29, tells The Post. “We haven’t copied the music exactly, we haven’t copied the costumes exactly and I haven’t copied him exactly.”

So the pressure was off, to a certain degree, for Egerton to measure up to a living rock legend while singing John’s classics such as “Tiny Dancer,” “Bennie and the Jets” and, of course, “Rocket Man.”

“The intention was for him to sing the songs with soul, with spirit and with the natural, God-given ability he has,” says Giles Martin, the film’s music and soundtrack producer. “To me, it would become distracting … if he were just trying to impersonate Sir Elton John.” 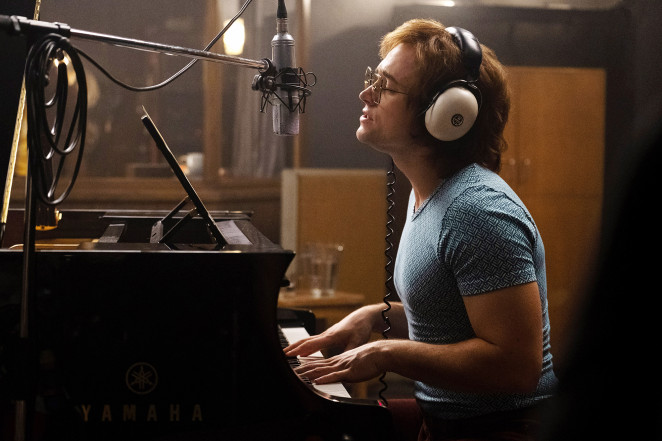 Michael L. Roberts, who was both vocal and piano coach for Egerton, credits John with giving the green light for creative freedom. “Elton was very careful to ensure that Taron had the room to embody the character and the spirit of Elton John without ever attempting an impersonation,” he says.

Sometimes, though, the resemblance is stronger. “For certain moments, I mimic him more,” says Egerton. “I think ‘Your Song’ is sung very much in his style because it felt like a very important moment about the writing of … a very culturally significant bit of music. So I wanted to do it fairly close to how Elton did it all those years ago.”

Previously best known for his role in the “Kingsman” film series, the Welsh actor had only done “bits and bobs” of singing over the years. One vocal turn, though, proved to be prescient: Egerton crooned John’s hit “I’m Still Standing” while voicing the teen gorilla character Johnny in the 2016 animated movie “Sing.”

“That was really a nice little toe in the water moving toward this project,” he says.

Martin was confident about Egerton’s vocal chops from “Sing.” “From the word go, he could sing,” he says. “I was just trying to hone him so he became a rock star as opposed to an actor who just sang.”

To that end, Martin concentrated on phrasing. “Even though I didn’t want Taron to do an impersonation of Elton John, I wanted him to pay attention to how Elton phrases,” he says. “Acting has a similar nuance where it’s all about the delivery of the line.”

Meanwhile, Roberts worked with Egerton on range development, and breath support and control. He also gave Egerton some musical homework to get inside a young Elton’s head. “I was very keen for Taron to confine himself to the things that Elton would have been listening to at that time in order to help the phrasing,” says Roberts. “So I would ask Elton to give us a list of the things he was listening to at the time. And then I used to give Taron listening lists every week.”

That meant Egerton getting schooled on everything from The Band and Bob Dylan to classic ’50s rock and R&B. Egerton did similar research to capture John’s dynamic piano-playing style. 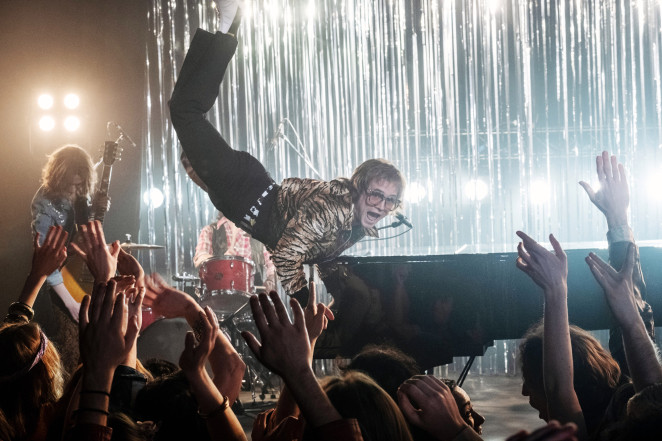 But Egerton, who didn’t know how to play the piano before “Rocketman,” still doesn’t consider himself a real player now. “It takes years, not months,” he says. “Our primary focus was on trying to get me very basically proficient so that I knew where my hands should be on the keyboard, and I knew the rhythm they should be moving in.

“But if the audio in the film was my piano playing, I think people would be getting up and leaving the auditorium . . . What you’re hearing is largely the work of a fantastic pianist named Dave Hartley, who is an old friend of Elton’s who’s worked with him a lot.”

Still, Roberts says that his charge was a pretty good student. “It was my job to bring Taron close enough that it would look convincing,” he says. “But he did end up actually being able to play things like the introduction to ‘Your Song’ and the ‘Crocodile Rock’ performance at the Troubadour.”

Egerton says he found “the rockier stuff,” such as “Saturday Night’s Alright for Fighting,” to be more challenging, but he knew he’d nailed “Pinball Wizard” after he got the thumbs-up from John. “He said to me, ‘Oh, you’ve got it now!’ So that was a really validating thing to hear from him,” says Egerton, who would send John rough mixes for his feedback. “It was so important to me that he approved of the choices we were making with the music. And he just loved it.”

Martin — who, as son of Beatles producer George Martin, has previously mined the Fab Four’s catalog — enjoyed being “liberal with the interpretation of the songs” for “Rocketman,” but he knows that the original bitch is still bad.

“I don’t see it as I’ve taken Elton’s songs — I’ve kind of borrowed them,” he says. “They’ll always be his songs.”

Previous 2019 GERMANY’S MOST POPULAR LONG SKIRT
Next Arnav Gupta, man who set himself on fire near White House, dies