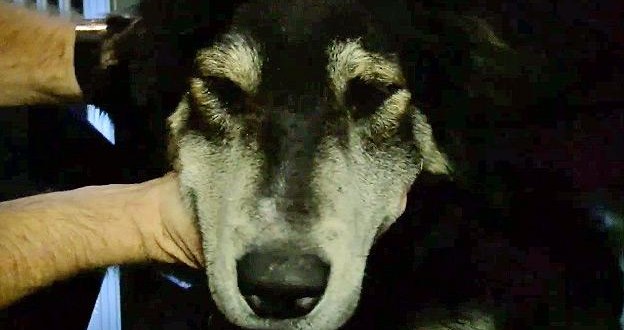 This dog is loyal to his friends until the end — and beyond.

According to KTRK, Animal Control officers in Jonesboro, Arkansas, received a call about two dogs lying in a ditch on Thursday. When the officers arrived they found a heartbreaking scene: two elderly dogs, one dead, with the other holding vigil over his late friend.

Authorities believe the deceased canine was hit by a car the day before, while walking with his friend, leaving the other dog, a shepherd/collie mix, to mourn.

“It was probably at least five to six hours, at the very least, that they were there,” Officer Mike Owens told KTRK. “We’ve seen them where they will run together and stuff like that but not where one of them had already gone and the other one would be lying beside it.”

The steadfast friend continued to grieve, even after officers arrived to move the dog to a shelter.

Owens believe the brokenhearted canine has an owner, because the dog is social and looks well cared for. He hopes that someone claims the dog soon, so the pooch can have a little happiness in his life once more. If no owner comes forward by Friday, the dog well be put up for adoption.