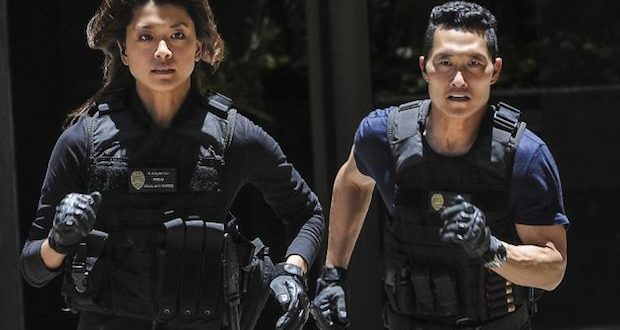 CBS’ Hawaii Five-0 is bidding adieu to not one but two original cast members: Grace Parkand Daniel Dae Kim, neither of whom will be returning for Season 8, TVLine has learned.

Viewers will learn what became of Kono Kalakaua (who went “rogue” to chase sex traffickers in last month’s finale) and Chin Ho Kelly (recently wooed to head up a San Francisco Five-0 unit) in the Season 8 premiere, airing Friday, Sept. 29 at 9/8c.

Park and Kim’s departure comes as Five-0 enters the final season of Alex O’Loughlin’s current contract; McGarrett’s portrayer hinted last fall that Season 8 will be his last. Sources tell our sister site Variety that Park and Kim had been seeking, but failed to secure, pay equality with fellow original cast members O’Loughlin and Scott Caan.

To help fill the imminent void, as TVLine previously reported, casting is underway for the new series regular role of Tani, a lifeguard who until recently was a top police academy candidate until she got kicked out, and who will find her way onto McGarrett’s team.

“I will never forget meeting Daniel while still writing the pilot and being certain there was no other actor who I’d want to play Chin Ho Kelly,” shworunner Peter M. Lenkov said in a statement. “Needless to say, Daniel has been an instrumental part of the success of Hawaii Five-0 over the past seven seasons and it has personally been a privilege to know him.

“Grace’s presence gave Hawaii Five-0 a beauty and serenity to each episode,” the EP continued. “She was the consummate collaborator, helping build her character from Day 1. They will always be ohana to us, we will miss them and we wish them both all the best.”

Kim is an executive producer on The Good Doctor, ABC’s new medical drama which he co-developed for the U.S. with House’s David Shore. It premieres this fall and stars Freddie Highmore (Bates Motel).

CBS issued a statement that read, “We are so appreciative of Daniel and Grace’s enormous talents, professional excellence and the aloha spirit they brought to each and every one of our 168 episodes. They’ve helped us build an exciting new Hawaii Five-0, and we wish them all the best and much success in their next chapters. Mahalo and a hui hou….”