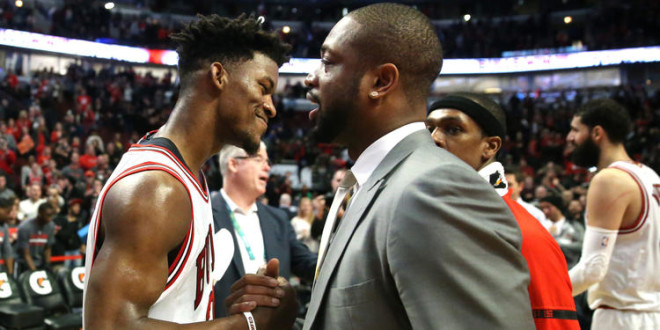 Butler posted the second-highest scoring game of his career, finishing with 52 points, 12 rebounds and six assists, as the Bulls scored a much-needed victory over the Hornets 118-111.

In a rare appearance, rookie Denzel Valentine sank three 3-pointers off the bench before leaving late in the third quarter with a sprained left ankle.

Doug McDermott started for Wade, who sat for the third time this season and first to injury. He has rested the second of back-to-back games twice.

Wade, who turns 35 this month, has a history of knee issues. But coach Fred Hoiberg said this incident isn’t considered serious enough even to warrant an MRI exam. Hoiberg is optimistic Wade will return for Wednesday’s game in Cleveland against LeBron James and the Cavaliers.

Wade played all five games in a seven-day stretch, including a back-to-back set that concluded Saturday. That’s when Wade’s swelling developed, Hoiberg said.

For the Hornets, Cody Zeller is out after entering the NBA’s concussion protocol and Marco Belinelli is out as well with a left ankle sprain.

“We thought Michael was a big part of our good start Saturday. He had six deflections before the first timeout.” Hoiberg on his decision to start Carter-Williams over Rajon Rondo again.