This Sunday marks the one-year anniversary of the release of David Bowie’s Blackstar, and Bowie fans are still searching for secret glyphs and hidden messages in its album art. In case you haven’t been following: A few months after Blackstar came out, a fan found that the geometric star on the album cover displays the image of actual stars in the night sky when it is exposed to sunlight. Then, in November, Blackstar graphic designer Jonathan Barnbrook said in a radio interview that there’s “actually a few other things as well,” including “one big thing which people haven’t discovered yet on the album.” Bowie’s most devoted fans began rifling through Blackstar to find this one big thing, and some of them sent their findings to us at SPIN, which we collected in a post here.

Since then, the tips about Blackstar haven’t really stopped coming, and we’ve gathered the most interesting things we’ve received over the last two months below.

A reader going by “skriet skriet” pointed out that the Bowie portrait next to the “I Can’t Give Everything Away” lyrics might be a reference to the cover of his 1977 masterpiece Low. In both images, Bowie is shown in profile, looking to the viewer’s right, wearing a dark coat with a high collar, and both images feature a similar color palettes. As several critics have noted, “I Can’t Give Everything Away” has a harmonica part that is basically a direct rip from the Low instrumental “A New Career in a New Town,” so it’s likely that the visual similarities are also intentional–and it certainly wouldn’t be the first time Bowie used album art as a commentary on his own legacy.

If you turn the portrait page with the orange square over, you’ll notice that it’s the start of the Credits/Acknowledgements page. However, if you hold that page up to the sun, you’ll see that the orange square from the other side is still plainly visible, as is Bowie’s portrait. It’s extremely cold where I am because it’s winter, and because I was holding the booklet close to me, my breath was getting on the page. I noticed the words started to disappear! Very quickly I realized that if you hold the page at the correct angle in direct sunlight (or I’m guessing a very bright light) and/or it’s relatively warm, you’re left with a perfect portrait of David Bowie and all the words have disappeared right off the page. 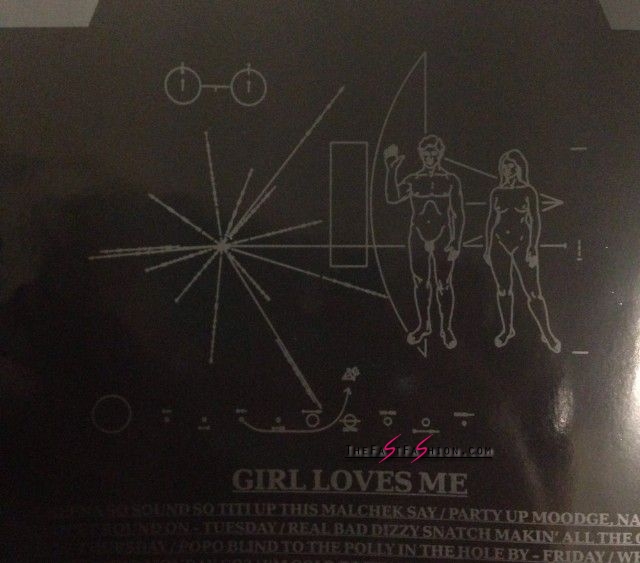 Multiple readers pointed out that the liner notes contain an image of a Pioneer plaque above the lyrics to “Girl Loves Me.” The Pioneer plaques are aluminum plates that were placed inside the Pioneer 10 and 11 unmanned spacecraft, which are inscribed with a pictorial message meant for any extraterrestrials who might intercept them. Much like Blackstar, the plaques themselves are filled with arcane symbols, which are supposed to convey some basic information about the Pioneer spacecrafts: they came from Earth and were built by humans, they come in peace.

Beyond Bowie’s longtime fascination with outer space, aliens, and the stars, reader Heather Zanitsch detected additional symbolism having to do with the dates that the plaques were first sent into space:

The first Pioneer plaque went into space on the Pioneer 10 mission, in March, 1972, when Bowie began the leg of his American Ziggy Stardust tour.  In April of ’73, Bowie stepped foot for the first time in Japan to begin that particular leg of the Ziggy Stardust tour, and Aladdin Sane was released about a week later. When David sings, “That’s the message that I sent,” I think he is referring to his Savior Messiah who foretold and lived through social upheaval.  As invested as Bowie was in American culture and politics, I think he knew what kind of world he was leaving and wanted one more chance to point out that his was a message of love, ultimately.

The Pioneer Plaque is kind of an important clue to other things.  In 1995, when Bowie released Outside, Pioneer 10 began to move on course further into space, into the direction of what we see here on earth as the Taurus constellation.  Bowie made references to the mythological Minotaur through Outside and other records, and the Minotaur is the half-bull half-human son of the god Zeus in bull form. To my recollection, Bowie mentioned the “bull returning” or to “look for the bull” but I neither have a source for those quotes nor nothing but my poor mind to remember. Outside also crucially links dates and areas in the artwork that were important to Bowie.

Reader Chris Gray interpreted the Pioneer plaque’s designs as literal instructions to the listener, and found a “3D image” effect (which SPIN hasn’t been able to replicate):

I have been studying the odd design on the page where the lyrics for “Girl Loves Me” appear. The design appears to be an instruction, so it is! You have to get a torch, darken the room and place the torch to the design, with the design very close to the wall. You will need to slightly curve the design, as per the instructions, and what you will get is a mesmerizing 3D image of the man and woman who appear to be standing on a star / planet / heaven.

I have discovered that the whole pull out booklet is littered with amazing multi coloured, 3D images when you apply a torch very close to them. It’s utterly spellbinding!

In our previous post, several readers noted that the fragmented stars on the bottom of the Blackstar front cover can be interpreted to read BOWIE–the whole star is an O, the three-pronged one is an E, and so on.

After that, readers Nishe Ink and Genn Gauvin pointed out that the stars can also be seen as a depiction of Bowie’s famously asymmetrical eyes–especially when the stars are held up to a mirror. Nishe Ink provided some helpful images to illustrate: 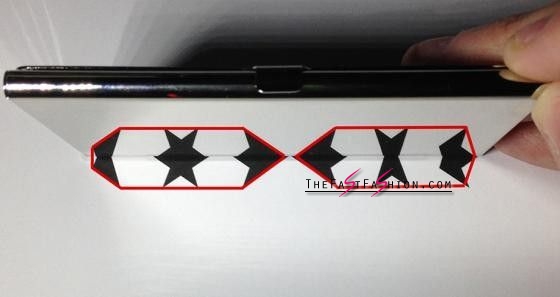 Just like Bowie’s eyes, one pupil is larger than the other.

Reader Vicki Charal sent us the strangest Blackstar secret of all:

My first edition CD copy of Blackstar smells like black liquorice (the salty kind, not the sweet) even to this day. 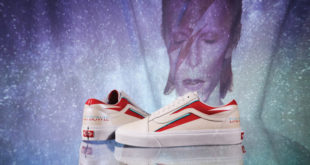