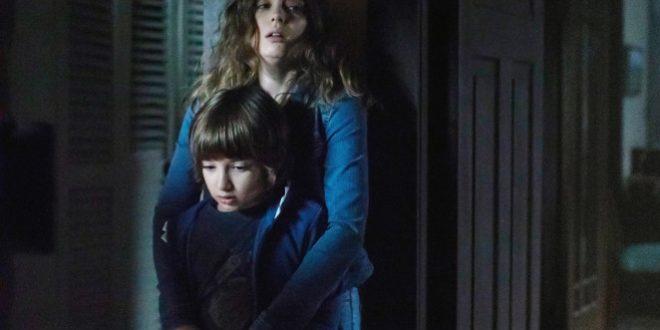 The big question of the new horror film “Come Play”: Do I know you?

The déjà vu begins as a young boy reads aloud a mysterious illustrated children’s book called “Misunderstood Monsters,” albeit on a mobile phone, and the creature in the story reveals itself to be real.

This nightmarish being, we learn, is only visible to humans using screens, such as through the camera on your phone. It communicates verbally via the TV and tosses around furniture like a beach ball. Might wanna join Babadook’s lawsuit, “Poltergeist.”

You can tell the beast is nearby because lightbulbs flicker (“Stranger Things”), and initially just one kid believes its presence while no one heeds his warning (“Child’s Play”). Writer-director Jacob Chase’s creepy clip show isn’t maddening or poorly made, but all the borrowing makes it clear that nothing new is going to happen here. Hate surprises? Have I got the movie for you!

The kid, Oliver (Azhy Robertson), is confused to discover the “Monsters” story pop on his smartphone one day. He’s autistic, and uses the device to communicate at school. “Meet Larry,” the picture book reads. “Larry just wants a friend.” You see, Larry has a tough time finding pals because he looks like a spider covered in a pasty human flesh with beady red eyes. Larry has clearly read the famous self-help book “How To Kidnap Friends and Terrify People.”

The creepiest moments come just after the eBook is first opened. Oliver hears a scuttling in his room late at night and uses a Snapchat-like app that gives us funny faces. Using the app, a few feet in the distance he spots another hovering head.

But the invisible-guy-is-in-the-corner routine gets old fast, despite a vulnerable performance by the talented, 10-year-old Robertson, who played Adam Driver’s son in last year’s “Marriage Story.”

Once his parents, played by Gillian Jacobs and John Gallagher Jr., get up close and personal with Larry, the film becomes a repetitive series of chase scenes from a mostly invisible foe.

For the most part, the film is second-rate horror, but watchable enough. Much more unpalatable, however, is a “Twilight Zone”-esque moral at the end concerning society’s addiction to screens. The minute-long moment sets out to explain Larry’s origins, but makes no sense. There is a logical, scientific explanation for how, say, nuclear war created Godzilla. But this movie suggests that using Grubhub and Instagram caused an evil invisible stick monster that preys on children. Um, how, exactly?