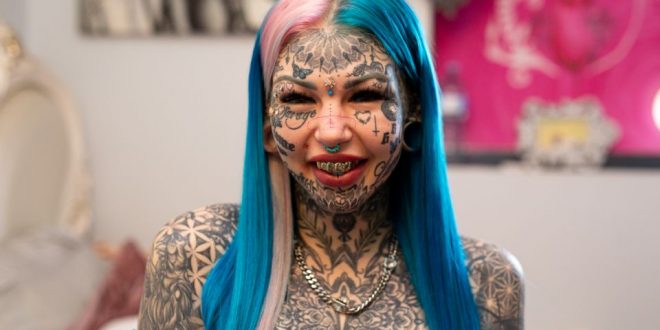 A heavily-tattooed Australian woman is revealing she went through $120,000 worth of body modifications to morph from a blond-haired teen to what she describes on Instagram as a “blue eyes white dragon.”

Amber Luke, 25, recently shared a selfie on her Instagram Stories under the caption “body modification is the ultimate form of self-expression.” She also has a section in her Instagram account dedicated to before and after photos of her surgeries, including breast augmentation and a butt enhancement.

Among other things, Luke has a split tongue, lip tattoo, gauged ears, tattoos on nearly every part of her body and has even tattooed the sclera (whites of her eyes) blue.

Luke has shared photos of herself pre-transformation on Instagram, noting that she was “catatonically depressed, suicidal and was a walking dead girl.” She added, “I was numb. I hated myself [the] majority of the time – that hatred ran deep. It tormented me.”

Now, Luke wrote, she’s “totally transformed myself into someone [I’m] proud of being. I’m a strong woman who knows exactly what she wants and who she is.”

RELATED:  The Teeny-Tiny Tattoos We Want This Summer

Luke, who declined to comment to Yahoo Life, has 47,500 followers on Instagram, including fans who regularly fill the comments of her posts with fire emojis. “Amazing you’re a work of art!” one wrote in a recent post. “Mega legendary creature,” another said.

Luke shared in a recent Instagram Story post that she’s spent $120,000 on body modifications so far. And, while she hasn’t indicated whether she plans to do more, she regularly updates her posts with photos of new tattoos.

But, while body modifications are popular in some circles, experts warn that they can be dangerous to your health.

“Surgery is a challenge for the healthiest of patients,” Dr. Edward S. Lee, an associate professor of surgery at the Rutgers New Jersey Medical School, tells Yahoo Life. “A larger body contouring operation, like having breasts done…we compare that to running a marathon. You need several months to recover.”

Every surgery comes with a risk of complications, including infection, Lee says, and it’s even greater when someone regularly has procedures done. “If you do something like get a tattoo and then have breast implants put in, and you’re only spacing them out a little, you put yourself at a slightly higher risk of infection,” Lee says. 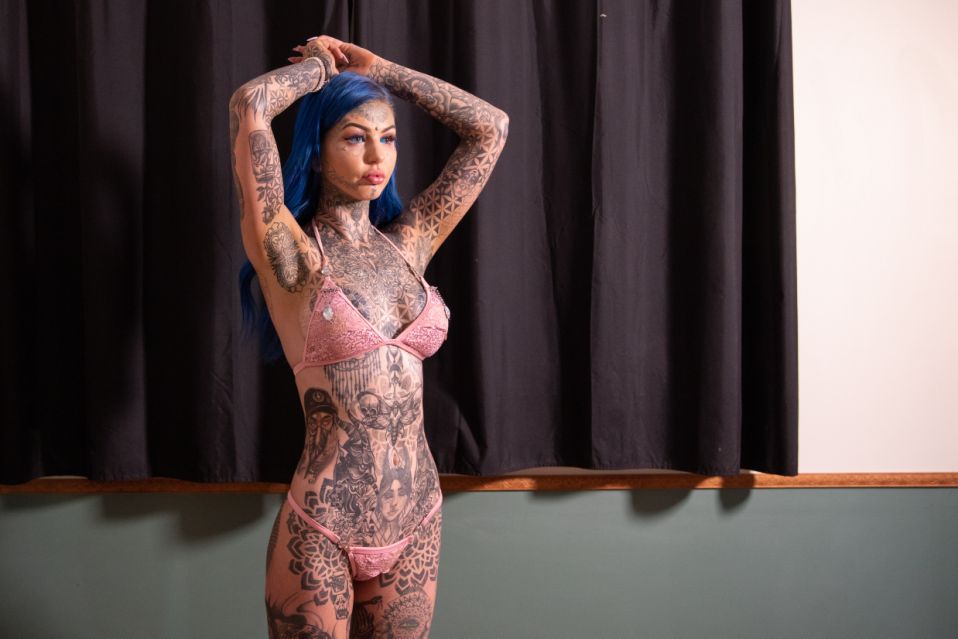 Lee is especially wary of extreme body modifications, like splitting the tongue. Aesthetic and function aside, “the people who are doing it are usually not licensed practitioners. The materials you are using are questionable in terms of sterility. Also, the tongue does bleed quite a lot,” Lee says.

Even just tattoos come with the risk of communicable diseases, like HIV and hepatitis C, if they’re not done in a sterile environment, Dr. Gary Goldenberg, an assistant clinical professor of dermatology at the Icahn School of Medicine at Mount Sinai in New York City, tells Yahoo Life. “Other concerns are infections, such as staph,” he says.

Tattoos also change, Goldenberg points out. “Some tattoos can fade with time,” he says. “As the skin ages, it becomes more wrinkly and loose, potentially changing or distorting the way the tattoo looks.

Sclera tattoos are especially dangerous, Vivian Shibayama, an optometrist with UCLA Health, tells Yahoo Life. “Whitening the whites of your eyes is extremely dangerous,” she says. “It involves removing a thin surface of the eye called the conjunctiva, which protects the ocular surface. It could lead to infection, perforation and blindness.” Shibayama’s advice: “Don’t do it.”