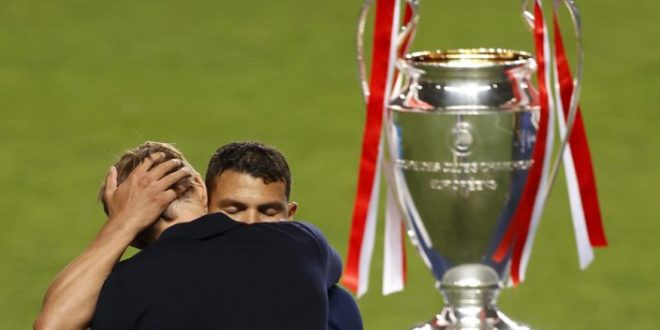 Paris St Germain were beaten in the Champions League final by Bayern Munich on Sunday night and captain Thiago Silva says he has played his last game for the club.

It was widely expected that he would depart the Ligue 1 champions this summer and the Brazilian confirmed as much, but says he has not yet decided on his next move.

Chelsea are an option but the veteran centre-back is in discussions with multiple clubs and dismissed any notion that a contract is already agreed with any new side.

“I’ve not accepted any bid. Reports of agreement reached with Fiorentina are not true,” he said to Sky.

“My agent is talking with Fiorentina as with other clubs. I’ll decide in the next days with my family.”

On the Lisbon final itself, Silva paid tribute to the supporters of PSG and apologised for being unable to bring home the trophy they craved most.

He further stated his hopes to return to the club in some capacity down the line—but the 35-year-old says there’s plenty of game time left in him yet and he hopes to feature at the 2022 World Cup finals. He currently has 89 caps for Brazil.

“It was my last game in Paris. I am sad. I apologise to the fans. I thank all the fans for their love,” he added.

“I will return to Paris, the club I liked, in another role. [But first] I want to play three or four years again and play at the World Cup in Qatar.”

Thiago Silva won seven Ligue 1 titles in his eight years with PSG. Frank Lampard will hope his vast experience and defensive know-how is on show at Stamford Bridge next season, but there is clearly plenty of competition for his services.