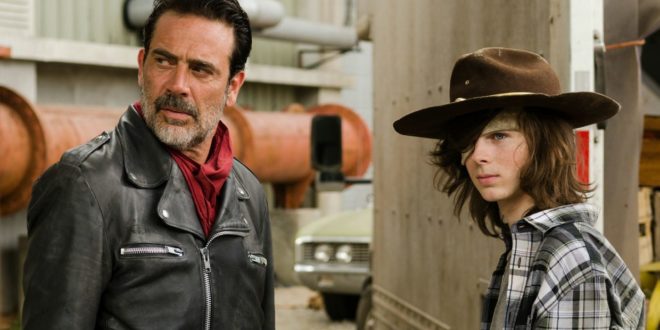 One of the major stars of The Walking Dead is unhappy about Chandler Riggs’ exit from the show, which happened last night (Feb. 25) on the mid-season premiere of Season 8.

After being bitten by a walker back in December’s mid-season finale, Riggs’ Carl Grimes succumbed to his wound over the course of a nearly 90-minute episode as his father Rick (Andrew Lincoln), “best friend” Michonne (Danai Gurira), and others bid farewell.

But one person who wasn’t there to see Carl off was the show’s current villain, Negan (Jeffrey Dean Morgan), who developed a grudging respect and admiration for Carl after taking him prisoner back in Season 7 (an episode that stuck pretty closely to the comics). In fact, Morgan seems to be among the many people — including Riggs’ own father — who are not happy to see the character die. Morgan found the time to post a lengthy and quite sweet farewell to his fellow actor on Instagram:

Morgan’s remarks about being “a fan of the Negan Carl relationship in the comics” and how he’ll “forever be [disappointed] we only scratched the surface of what could have been” refer to the aftermath of the “All Out War” scenario in the books, in which Rick and his group defeat the Saviors and Rick imprisons Negan instead of killing him.

Over the course of the next two years, Carl visits Negan regularly and talks with him, sometimes seeking advice, and it’s revealed that the two have become friends. More happens with Negan after that, but clearly the arc of Carl becoming close with the man who murdered so many of his own companions — and who beat, humiliated, and nearly slaughtered his father — was one that Morgan wanted to explore further (and perhaps Riggs, too, for all we know).

In any case, that won’t happen now, and it remains to be seen how Negan reacts to Carl’s death, as well as what happens to Morgan and the character once the TV version of the “All Out War” storyline comes to a close.

Do you think Carl was killed off unnecessarily, and would you have liked to see the relationship between him and Negan developed on the show the way it was in the comics?