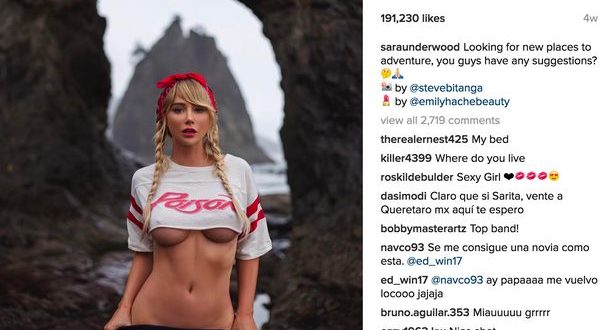 Sara's blog is a hit with fans (Photo: Instagram @ saraunderwood)

Playmate of the Year Sara Underwood is turning heads with her sexy travel blog.

The 32-year-old has found a legion of loyal fans after posting a series of bikini-clad pics to Instagram.

The blonde beauty has travelled to stunning locations around the globe, posed naked in hot springs, flashed her bum in front of mountains and posed topless with her best pal, Mother Nature.

The stunning model shows she has a hilarious sense of humour too.

In one snap, she bends over in front of a puff of smoke, captioning it ‘Pardon muah’ and holding her hand over her mouth to mimic embarrassment.

She has a sweet side too, demonstrated by her posing up with a tiny Shetland pony in a muddy field.

Crouching down to his level and holding his face in her hands, she wrote: “I love him so hard it hurts #bae”.

Sara first appeared in Playboy in October 2005. She was pictured on the cover holding a football and covered only by body paint.

Her saucy travel pics have seen her pick up an impressive 7 million followers on Instagram.

RELATED:  Sara Underwood: 14 Hottest Photos of In A Life Jacket Is Mind-Blowing

Every picture she posts garners hundreds of comments with people telling her how beautiful she is – as well as the stunning locations she poses in.

Some fans even suggest places she should visit and offer to give her lessons in popular activities to their area.

One wrote: “You should come to beaver creek! I’ll teach you how to ski!!!”

Some feel that the focus of the pictures should always be Sara and not the stunning locations she’s visiting.

“Precious landscape, honey, but your beauty is almost invisible!!! You must be always in front!!!,” said one fan. 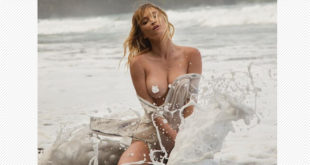 Sara Underwood: 14 Hottest Photos of In A Life Jacket Is Mind-Blowing